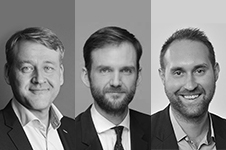 Juha-Matti Liukkonen is the director of space and new technologies at the consultancy Reaktor. He is the chairman of board at RSL, a new space start-up developing small satellites and he has been elected to represent the Finnish space industry at the national Space Committee.

Arthur Sauzay is a space policy expert at Institut Montaigne where he authored a report on European space policy in December 2017, Space: Will Europe Strike Back? He is a lawyer at the Paris office of Allen & Overy LLP, where he works on complex regulatory and environmental matters, including for European and international aerospace and telecommunications companies.

How to get the European space industry off the ground?

In order to make its voice heard on the international stage, Europe must find its place among the major space powers: the United States and China in particular. Space has become a major geostrategic challenge, a political and economic playground where the power of persuasion and the power of coercion are at stake.

Following the 2017 note entitled Space: Will Europe Strike Back?, Institut Montaigne has continued its study of risks and opportunities for Europe in relation to space affairs. In February 2019, it held a Franco-German seminar on space issues to explore new routes for additional European cooperation in that field.

Drawn up by three European experts - one French, one Finnish and one German - this note takes stock of recent trends and issues in the space sector. It analyses Europe's current position in New Space, highlighting the potential and limits of the space policy pursued by the European Union in recent years and makes five public policy proposals aimed at making Europe a real space power.

A space sector in full transformation

A space not so far away

Space has become a central element of society. The multiplication of applications using satellite positioning systems (such as GPS or Galileo), the development of space imagery services for defence and industry and the central role of telecommunications all contribute to increasing our dependence on satellites, making it increasingly urgent to protect these strategic infrastructures.

New players in the space sector

On an economic level, Earth orbit is the new frontier of Big Data. Digital behemoths are investing billions of dollars to build satellite constellations to provide new connectivity services to the planet. In terms of amounts, the digital giants have thus become the first to invest in new space infrastructure.

From a geopolitical point of view, the Sino-American rivalry now extends to space. The renewed ambition of the United States is beginning to bear fruit: public investments are on the rise (NASA's budget rose by $2 billion in 2018 and again in 2019 and the lunar mission projects under the Artemis programme are evidence of this renewed interest). Ambitions are just as strong on the Chinese side and are clearly part of the "New Silk Road" project. 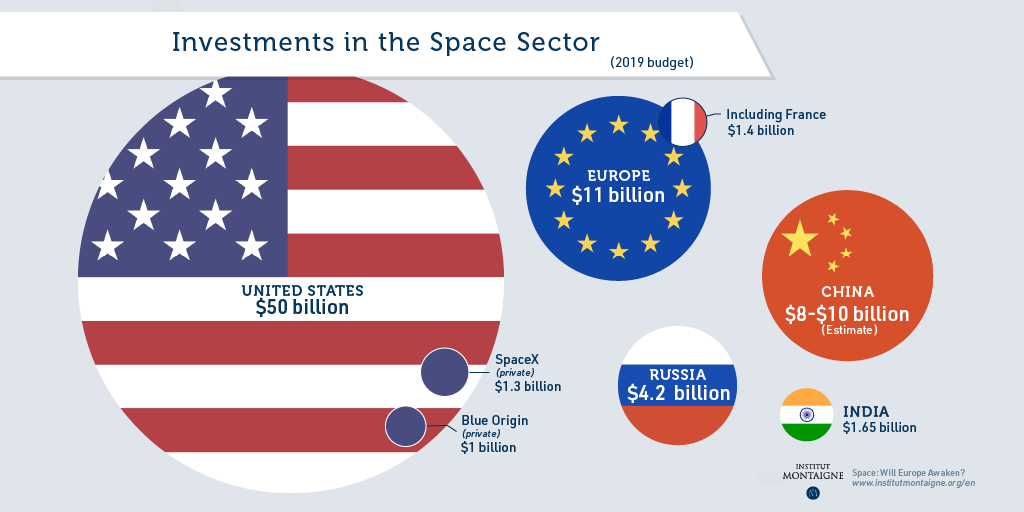 Europe has so far enjoyed real leadership in the space sector. But faced with the transformations in the sector, is it still in the race?

Europe has succeeded in establishing itself in several key segments of New Space: it now has world-class European champions and an industrial fabric of which it can be proud. In a speech delivered on 22 January 2020, Thierry Breton, European Commissioner for Space Policy, reiterated his determination to make space a priority: "Space is at the intersection of technological leadership, industrial strategy and geostrategic considerations. This is why, as your new European Commissioner in charge of space, you will be able to count on me to push an ambitious European Space Agenda". By bringing together the defence and space industries in the same Directorate-General, the European Union has at last taken account of the strategic dimension of the space sector. 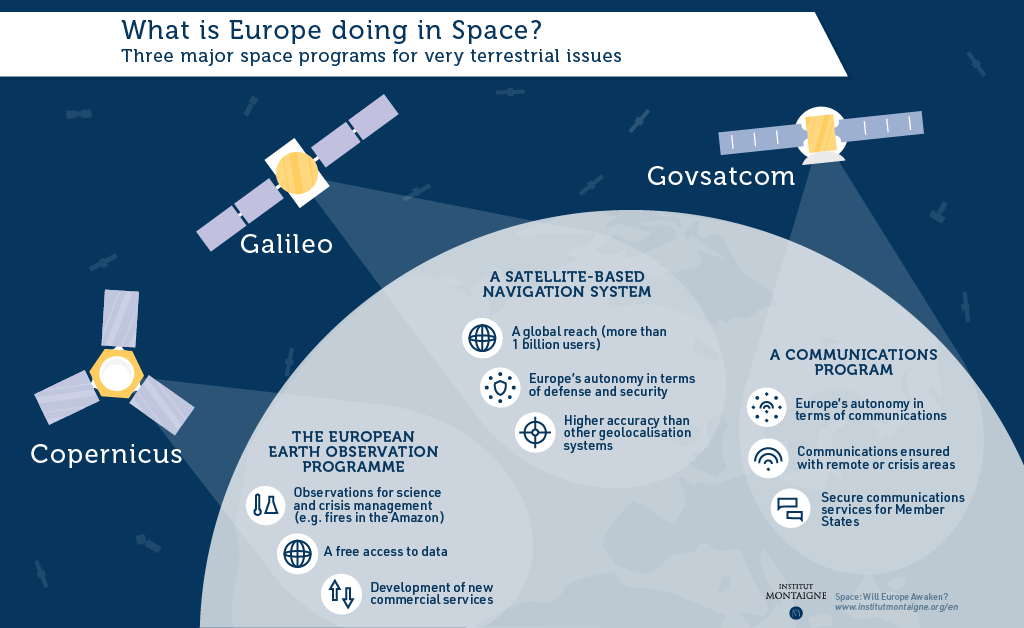 Three programmes developed by the European Union testify to the importance of space for Europe.

To reap the benefits of these investments in space, Europe can no longer rest on its laurels. Above all, it must strengthen the financing of these programmes in the context of the next Multiannual Financial Framework (MFF) 2021-2027. European space governance, which remains partly inadequate, needs to be rethought, in particular as regards the role of the European Space Agency (ESA) and the articulation of its action with that of the Commission. The European space industry, which represents Europe's real strength in this field, must also be preserved and developed, through a new European industrial policy making space one of its priorities.

To move toward these goals, concrete measures should be taken covering the various aspects of space affairs: strategic independence, technological leadership and geopolitical positioning.

1
In detail In detail

Ensure Europe’s autonomy in Space Traffic Management by developing EU capabilities for detection (ground-based radars and telescopes as well as space-based solutions) and computing, jointly with ESA and Member States.

Such an approach, clearly focused on the development of strategic industrial capacities, would enable Europe to take its place at the forefront of a changing space economy, while contributing to renewing the European dream with a realistic and ambitious space project.

2
In detail In detail

Adopt an innovative approach in terms of public space procurement. We propose creating a commercial services procurement unit within the future EU agency for the space program. The EU should, when relevant, support the development of commercial services (in particular, imagery and telecommunications) by European companies, and do so by becoming an anchor customer rather than an owner of satellites.

3
In detail In detail

Decide in 2020 on a European strategy regarding broadband constellations. These projects bear significant uncertainties, but they are set to become a deciding factor for the future development of space as well as for telecommunications and Big Data. Europe cannot afford to wait to see if they succeed. The EU Commission should take the lead in designing a policy which could include specific regulations as well as the analysis of the need to develop a European capability in this field.

4
In detail In detail

Ensure Europe’s leadership in small satellites by providing free access to orbit for in-orbit technology validation. This aims at simultaneously developing launch capabilities for these satellites (small launchers, or rideshares using larger launchers), as well as supporting the development and commercial success of small satellite technologies.

5
In detail In detail

Give the EU a political role in international space affairs, with an immediate focus on ensuring Europe has a role to play in, and benefits from, the ongoing push to develop activities in the space between Earth orbit and the Moon (so-called "cislunar space"). A potential concrete measure would be landing a probe on the surface of the Moon, by 2023, with a scientific and also commercial goal, which could include a demonstration of Moon resource utilization technology. This could send a strong symbolic message and push European established players as well as start-ups to take on the challenge.