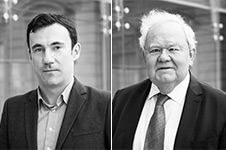 Is Huawei paying the price for its high profile? The case serves to create attention to Europe’s hard choices for 5G infrastructure. 5G brings with it unprecedented possibilities of applications, including healthcare, education, autonomous vehicles, augmented reality, industrial production, public services. But it does come with risks.

Donald Trump’s decision to forbid American companies from trading with Huawei is a game changer, with repercussions exceeding by far the US-China confrontation. European companies will inevitably be faced with hard choices, and the Chinese company’s long standing 5G offer suddenly poses a much more critical dilemma.

For the time being, France and several European countries have excluded a ban against Huawei and are opting instead for a regulatory approach aimed at securing sensitive data. Will such an approach be sufficient?

Institut Montaigne has decided to address the issues related to 5G deployment at a European level. The growing dilemma around Huawei sheds light on European weaknesses in digital networks.

Huawei, at the heart of China’s techno-nationalism

Thanks to massive support from the Chinese government, Huawei is well-positioned today to set the standards for the coming generation of telecommunications networks. Its shareholding structure, dominated by a "union" of employees, is opaque. It has indelible links with the core of China’s techno-nationalist project and its security apparatus.

Huawei fully benefits from the roadmap presented in 2017 by Xi Jinping at the 19th Congress of the Communist Party, which aims to establish China as a global leader in innovation by 2035. As its founder Ren Zhengfei now states, "our goal is to stand on top of the world. To achieve this goal, a conflict with the US is inevitable."

Huawei communicates in a radically different way in China than in Europe. While it prefers martial metaphors and communist imagery to thrive on Chinese soil, it leads an intense public relations campaign in Europe based on the value of openness, and even describes itself as a "European solution for 5G". Its lobbying efforts and the attacks it is subjected to in return provide the company with unparalleled media coverage.

The deployment of 5G has already started in the United States and in South Korea. Europe’s response so far is dispersed. Why?

The lack of a single telecoms market in the European Union and the diversity of rules and regulations, especially for equipment certification, mean that the allocation of frequencies and the certification of suppliers progress differently from one country to the other.

This interactive map and country files provide a macro view of Huawei's presence in telecommunications networks in Europe. It shows Huawei’s deep penetration in some countries, such as Italy, Poland, Spain, the Netherlands, Portugal, and Malta while in others, such as Norway, Slovenia, Estonia, and Denmark, the environment has proven more difficult for the company.

Europe does not have a unified position, nor common rules to decide of Huawei’s presence in its telecommunication networks. By the spring of 2019, Huawei had already signed 5G partnerships with 14 European operators, such as T-Mobile in Austria and Altice in Portugal. Overall, the company has signed 23 commercial contracts in Europe, including smart city projects in Duisburg, Monaco and Valletta in Malta.

Huawei’s echo in the public debate also varies greatly within Europe. In Poland, Norway and the Czech Republic, governments have been openly concerned about the risks associated with Huawei.while In other countries, there is simply no debate related to security. In Germany, the Netherlands, Sweden and the United Kingdom, security services have pointed to a higher risk of intrusion or sabotage in Huawei’s case than with other suppliers.

Huawei and the security of Europe

Beyond the short-term price-quality ratio, the continent’s trade-offs must include the security risks, while reflecting a geopolitical vision of its future place in the coming world order.

Huawei owns 17.5% of the smartphone market in Europe. 24.3% of its total revenues come from the Europe-Middle East-Africa region, of which more than 40% from equipment contracts with telephone operators.... The figures are telling: Huawei is already deeply embeddeded in Europe.

The risks related to the very nature of the business must be assessed. Several investigations have revealed significant flaws in the Huawei networks. In its annual activity report, the company now acknowledges the weakness of its software architecture, and mentions spending $2 billion in 2019 to address these serious vulnerabilities.

There is no publicly available evidence that Huawei is cooperating with Chinese intelligence. Yet, the Chinese equipment manufacturer fails to demonstrate that it does not pose any risk to the national security of the states whose network operators it equips. Signs are accumulating of Huawei's probable complicity in cyber-intelligence operations. One outstanding instance is the five-year intrusion into the computer systems of the African Union headquarters.

It is worth remembering that in China, according to the 2017 National Intelligence Law, organizations and individuals are required to support intelligence work and keep secret any knowledge of such activities. No company escapes the Party's authority in China, especially at a time when Xi Jinping unabashedly claims that "the Party leads everything".

Europe, from a defensive to an offensive posture?

What if we banned Huawei’s 5G offer? The option of a total ban on Huawei in Europe is not legally justified, and could hardly be implemented given Europe’s current lack of a unified decision-making capacity. In March 2019, the European Commission recommended a common EU approach to 5G network security, describing it as an issue of "strategic autonomy" for the European Union. This is an important contribution, but also one which falls short on the issues at stake.

What about European solutions, such as the procurement alternatives that already exist on the market? The Swedish company Ericsson and the Finnish company Nokia are very well positioned in the Old Continent, as well as in the world. In the spring of 2019, Ericsson had signed 18 public contracts for 5G in Europe and worldwide. Nokia has acquired 30 of them, including in China. Like Huawei, these suppliers are partly dependent on American semiconductors. The first 5G commercial offers, which are operational in the spring of 2019 in South Korea, the United States and Switzerland, all use European technology.

5G cannot be treated as a mere matter of cost, given that discussions around this topic involve several aspects of the European political debate: that of a "Europe that protects", the enabling of European sovereignty serving  strategic interests between China and the United States, the construction of digital infrastructures, and the support to be given to European companies allowing them to compete with the American and Chinese giants.

In the absence of a single market for telecommunications frequencies within the EU, and despite the Commission's efforts to promote the convergence of security standards, European countries are moving forward in a disorderly manner. Europe thus runs the risk of dropping out or even of being strategically downgraded. The certification of equipment on a European scale would be a laudable yet insufficient step in the right direction. Can Europe develop a less defensive, more proactive, and thus more ambitious, approach? The construction of 5G infrastructure is an opportunity for Europe to consolidate a technological and industrial offer, which therefore means it is a key tool for European sovereignty.

The advent of 5G is multiplying the risks inherent in the absence of European sovereignty. The protection of European data – and therefore the promotion of both autonomy of political decision-making and the construction of an environment minimizing risks for companies – calls for choices which go far beyond the calculation of costs for operators and the immediate interests of consumers. The first of these choices is to reduce or balance dependency on outside suppliers. This is especially the case since the traditional U.S. influence exerted through its suppliers is compounded today by the risk of a Sino-American duopoly or even the supremacy of China over the telecommunications sector. It is also important to realize that if interoperability between equipment providers exists (which comes at a cost), the division of Europe’s 5G infrastructure between Huawei-equipped zones and zones supplied by other manufacturers undermines the strategic coherence of Europe between China and the United States.

Because it is impossible for Huawei to demonstrate that it has no close and indelible links with the Chinese party state, there is an urgent need to keep this company away from risky infrastructures. The whole question is of course to determine the extent of the problem. In some cases, the company remains a useful spur to competition. The need to secure networks against the risk of sabotage means that there must never be reliance on a single supplier. If Europe is not capable of supporting its companies which still hold a large share of the world market, it must make a default choice by adding other non-European companies to them. They will all raise security issues, but none in a manner as uncontrollable as Huawei.

All flaws in 5G architecture are likely to be exploited by malicious actors. There is no Maginot line in the protection of interconnected networks. The training of qualified staff is a critical investment. The strengthening of human resources in the least well-provided member states is also important. The promotion of joint practices by the European Union must be supported by the member states most advanced in their 5G certification process. The sharing of R&D in network security must go further, as the data to be protected will not be concentrated in few very specific points on European territory. The current European approach focused on administrative regulation and the certification of equipment should be the subject of an exchange of best practices with the American ally. Europe must also reach a conclusion on the administrative measures needed to manage the risk of 5G equipment in the longer term. It is clear that there is no technical answer today that will remain valid with certainty in 5 years, as the balance between offensive and defensive measures against telecommunications networks is by essence unstable.

In the case of 5G, European champions already exist. Huawei's price competition benefits European consumers and the public finances: the telecom operators low procurement costs compensate the high investments in broadband spectrum auctions. But this is also handicapping European gear suppliers. Without the competition of Huawei, an intra-European consultation would be needed to build a market of a sufficient scale for the necessary investments to be profitable. Overall, Europeans cannot avoid the question of the US market, and therefore of cooperation with American manufacturers such as Qualcomm, Broadcomm and Nvidia to name a few. Other aspects may encourage the construction of a European ecosystem: equipment standards and regulation aspects; support for R&D; support for the emergence of European champions in the cloud; protection of OEMs against the risk of buyouts decreasing European industrial autonomy; or alternatively, new transatlantic industrial alliances. Protecting European interests is inconceivable without robust investment in infrastructure, enabling European companies to expand.