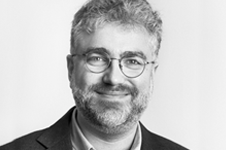 Dr. Joseph Dellatte is a Research Fellow for Climate, Energy, and Environment in Institut Montaigne’s Asia Program. He is also an Associate at Kyoto University and a member of the Japanese Joint Research Group on Renewable Energy Economics. He holds a Ph.D. and an MSc in economics and environmental policy from Kyoto University.

In 2016, 193 countries signed the Paris Agreement which soon became the symbol of international climate cooperation. Six years later, we are facing an alarming climate reality, which has only been worsened by the current geopolitical turmoil.

The war in Ukraine upended the global energy scene, bringing back traditional energy security patterns in favor of fossil fuels. China’s decision to cancel climate discussions with the United States after Nancy Pelosi’s August visit to Taiwan is yet another barrier to multilateral climate cooperation. This situation casts a pall over COP27, and questions countries’ capacity to accelerate their climate policy ambitions toward carbon neutrality.

It is in this difficult context for multilateral climate action that Institut Montaigne is publishing a policy paper analyzing the political feasibility of a climate club between Europe and Northeast Asia. This climate club aims to provide an additional format initiated by the Paris Agreement to accelerate and raise global climate ambitions.

This policy paper uses a comparative analysis of climate policies in these two regions. It also builds on a two-day policy dialogue that took place in July 2022 and a survey of more than 70 stakeholders from Europe, Japan, South Korea, and China.

Climate club: what is it?

Following the June 2022 G7 Leaders’ Summit, Heads of State declared: "we note with concern that currently neither global climate ambition nor implementation is sufficient to achieve the goals of the Paris Agreement by reducing greenhouse gas emissions".

Against this backdrop, G7 members, encouraged by Olaf Scholz and the German presidency, started discussions about establishing a climate club that would enable the "effective implementation of the Paris Agreement by accelerating climate action and increasing ambition". More specifically, a climate club would provide a framework for "minilateral" dialogues and cooperation between members to create common rules adapted to the climate objectives. Since the G7 Leaders' Summit, this initiative has remained under discussion and the details of its concrete implementation are not yet known. 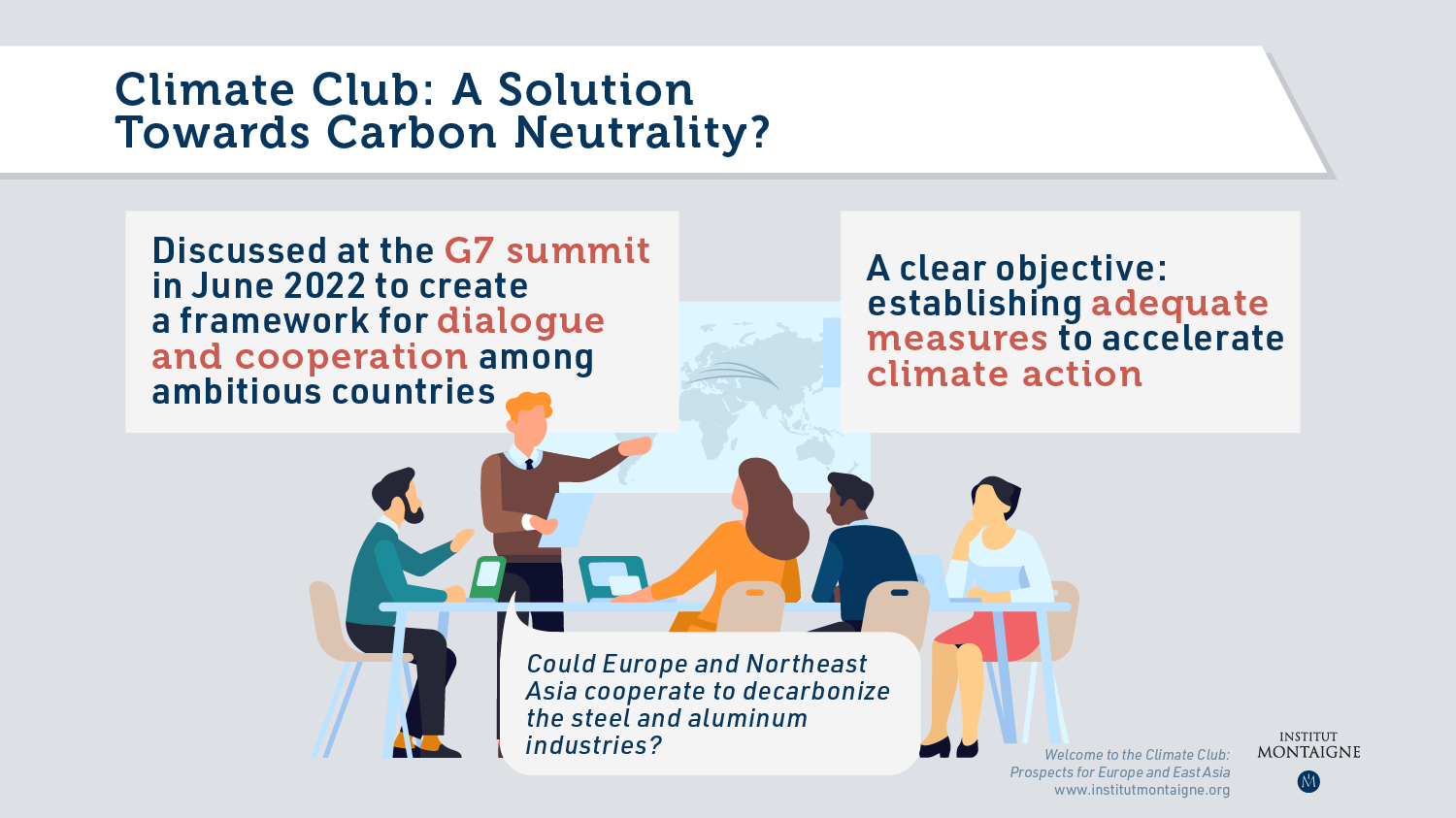 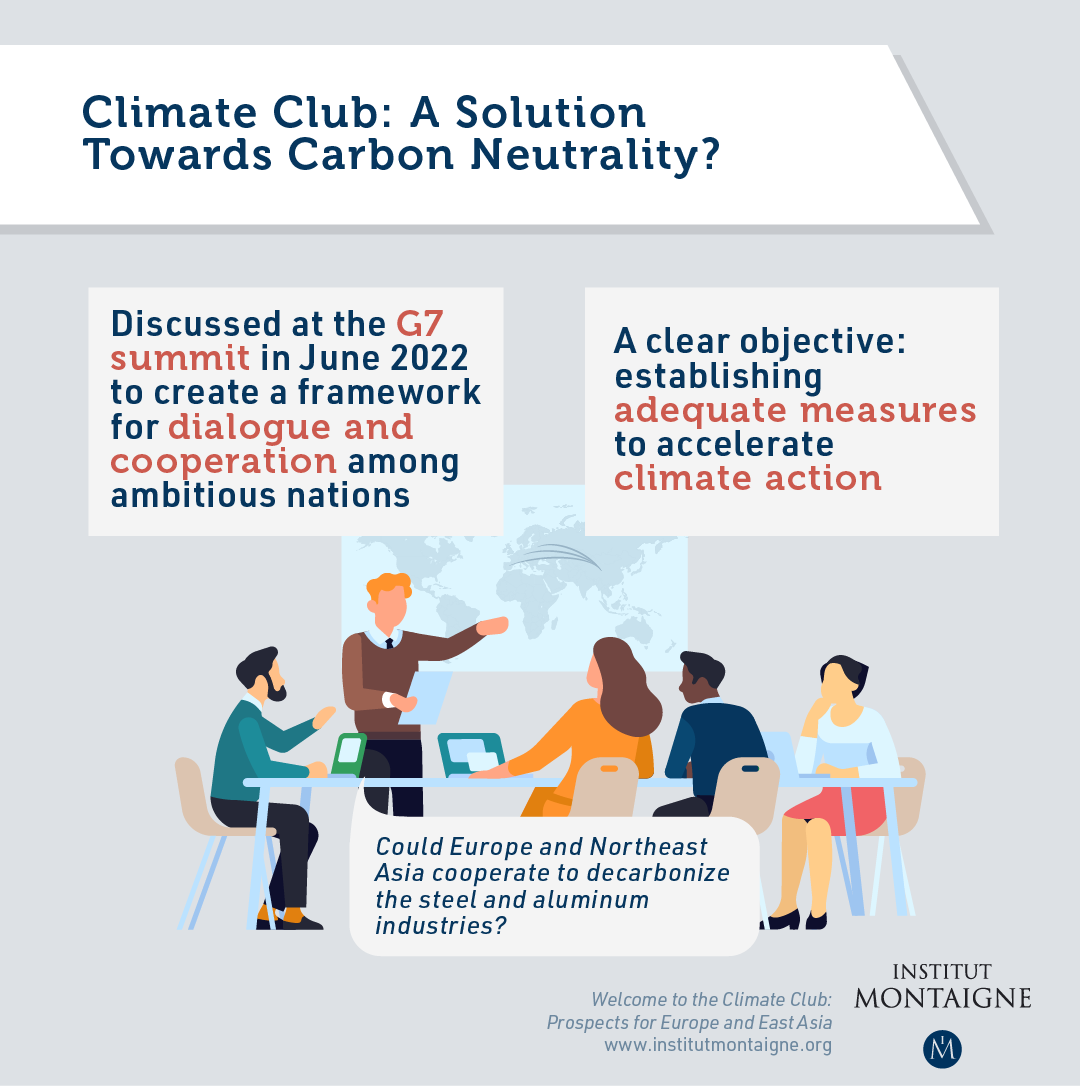 What are the main challenges?

There are significant differences of opinion between the countries studied in this paper, particularly regarding crucial decarbonization issues such as carbon pricing, carbon leakage, and the use of carbon border adjustment mechanisms (CBAM). In order to create an inclusive, ambitious, and binding climate club, it is essential to understand the diverging visions on these fundamental issues.

This research paper reveals that the establishment of a common carbon price in a climate club is at odds with the need for differentiation, at a sectoral, national, or sub-national (regional) level. The inclusion of explicit carbon pricing as a mandatory membership condition also appears to be counterproductive as it conflicts with the club’s inclusiveness.

Carbon border adjustment has the potential to become the compliance mechanism of a climate club, but opinions on this measure differ significantly. While European policymakers understand it as the most efficient mechanism to tackle carbon leakage, Northeast Asian ones have reservations. China, for instance, considers this measure discriminatory.

Despite these divergences, cooperation remains possible on a number of crucial issues. Sectoral climate clubs, for instance, are increasingly seen as the only option for decarbonizing high-intensity industrial sectors, such as steel and aluminum.

This reality is widely understood in Europe and Northeast Asia and is the most commonly agreed upon aspect of climate club discussions. This convergence suggests the possibility of cooperation between both regions in a climate club.

This policy paper puts forward the creation of a climate club that would take the form of a Forum promoting efficient measures to raise ambitions gradually. This "Climate Forum" builds on the previous G7 initiative, which has the greatest potential for climate action.

This Forum will be able to bring concrete solutions to a number of existing divergences: the inclusion of explicit carbon pricing, carbon border adjustment, and the decarbonization of carbon-intensive industrial sectors, three fundamental elements of international climate cooperation. 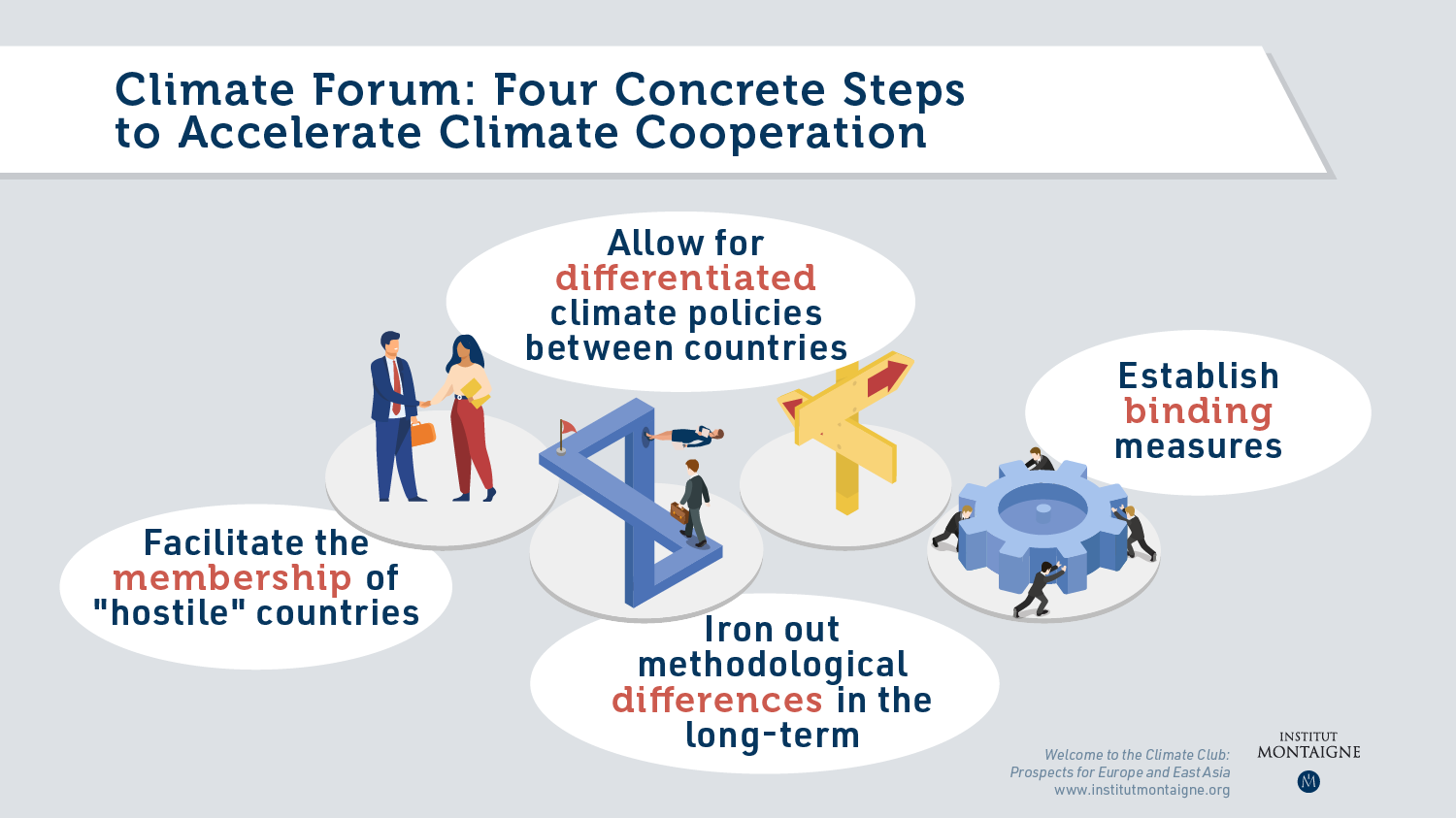 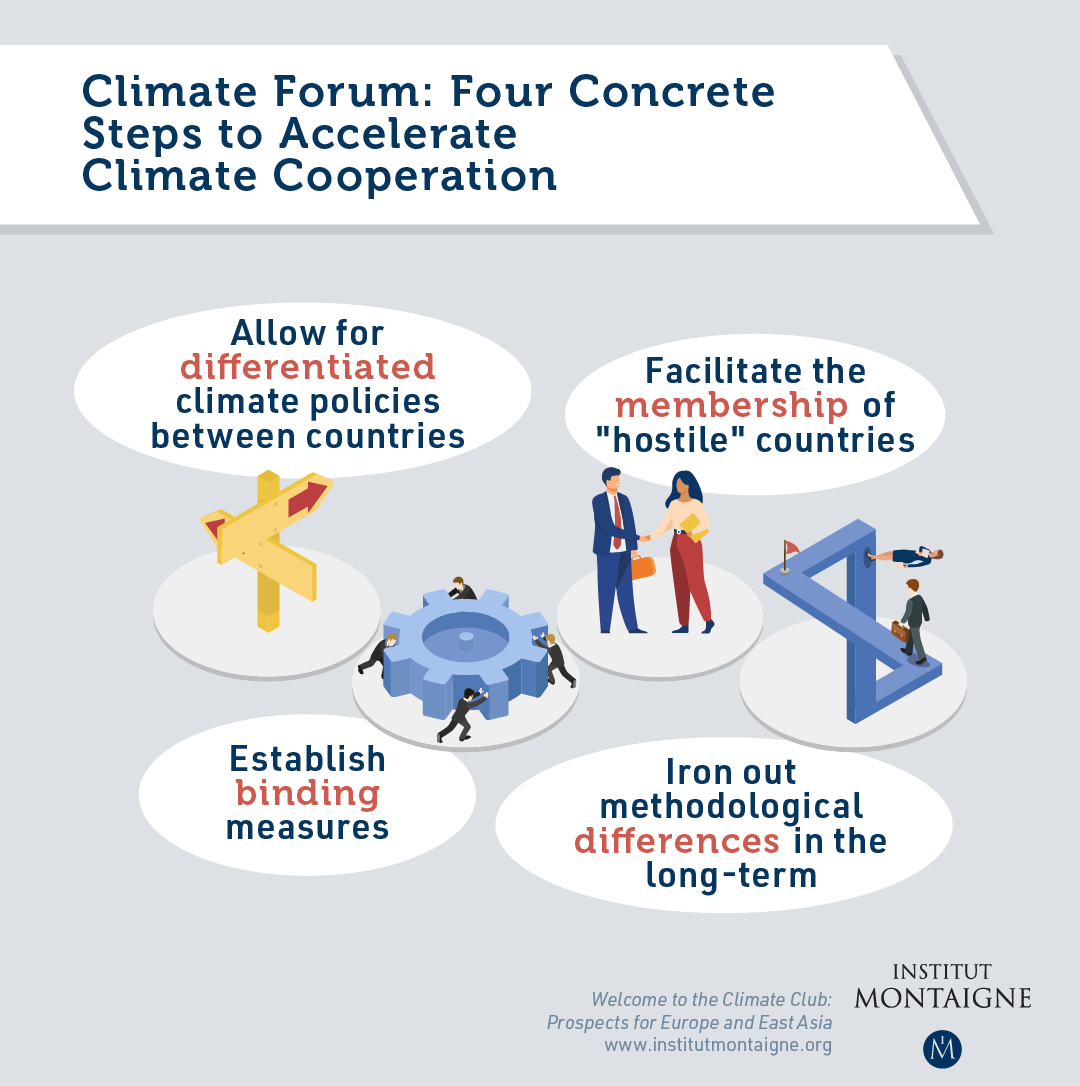 Nevertheless, China's inclusion in a Climate Forum will not be easy. China is suspicious of the G7 initiative and is not inclined to participate in an international format it did not initiate. The Forum should therefore take a proactive stance, accept some risk of confrontation to encourage greater ambition over time, and assume competition between countries.

The paper proposes to create a flexible Climate Forum, enabling sub-groups of members to form. Specifically, members would be able to choose the sectors in which they wish to cooperate, decide which members they want to cooperate with, and the time frame of this cooperation.

This flexibility will encourage the inclusion of large emitters such as China and India, which are a priori reluctant to join a climate club based on the G7 initiative. By enabling them to cooperate in specific sectors they deem crucial for their decarbonization, the Forum would incentivize countries to increase their participation gradually.

1
In detail Governance: design an open and inclusive Climate Forum In detail

Companies operating in sectors covered by the Forum should be allowed in as proactive members.

Membership requirements must ensure the effectiveness of the Climate Forum, such as the implementation of legally binding policies on the carbon intensity of goods.

2
In detail Carbon pricing: the achievable establishment of a compliance mechanism in a Climate Forum In detail

The Forum should be a cooperation platform upon which member countries can work toward harmonizing their carbon pricing policies.

The Forum should recognize carbon price heterogeneity in the short to medium-term and become an instrument for cooperation on border carbon adjustment, without aiming at a common carbon border adjustment mechanism for member countries.

3
In detail Labels and revenues: financial and trade incentives In detail

The main incentive to join the Climate Forum would be the implementation of a differentiated border carbon adjustment mechanism between members. Other instruments could also encourage countries to join such as: green labels for companies, the access to common green development projects, or the better recognition of the measurement of exported and imported goods’ carbon content.

Revenues generated by carbon border adjustment should be used for climate action, by financing ambitious mitigation and adaptation projects, both domestically and abroad. Revenues could hence act as a strong incentive to join the Forum, especially for developing countries to access better climate finance.

4
In detail Industrial decarbonization: industrial policies in the club In detail

The Forum should enable greater cooperation on decarbonization of critical sectors of interest (steel, aluminum, hydrogen and clean energy), and allow members to choose the sectors in which they want to cooperate.

The Forum should act as a negotiation platform for sectoral level-playing fields, while promoting the emergence of green markets for carbon-neutral goods through common rules (particularly on the carbon content of goods) and coordinated public investments.