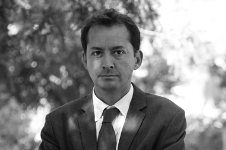 An  Ecole  Normale  graduate  and  with  an  agrégation  in  geography,  Hakim  El  Karoui  taught  at  the  Lyon  II University  before joining the cabinet of the Prime Minister in 2002 as speech writer. After serving within the  Ministry  of  Finance,  in  2006  he  integrated  the  Rothschild  bank,  where  he  led  the  Africa  Practice together with Lionel Zinsou. In 2011, he joined the strategy consulting firm Roland Berger,  where  he  was joint  head of the Africa  and  French  Government  advisory  sectors.  In 2016, he founded  his own  strategy consulting firm, Volentia. Hakim El Karoui is also a writer (Flammarion has published three of his books on economics and geopolitics) and social entrepreneur (he created the  Club du XXIèmesiècle - The 21stCentury Club,  the  Young  Mediterranean  Leaders,  and,  together  with  Bariza  Khiari,  penned  the  "appel  des  41"column on 31 July 2016 in the Jounal Du Dimanche newspaper)

“It is because distrust, ignorance, and the growing hostility of part of the population are threatening our national unity, that the Muslims of France must use knowledge to combat stereotypes and fundamentalism.” Hakim El Karoui
While religious fundamentalism is forcefully spreading throughout our territory, controversies surrounding the display of Islamic symbols in public spaces are intensifying, leading to rising fears and tensions. Such anxiety is fuelled by a general lack of understanding of French Muslims, of what they aspire to, and of how they practice their religion.
Today, discourse on Islam and the image of Islam are largely controlled by Jihadists, Salafists and others who prone fundamentalist ideals. The vast majority of Muslims of France do not
however identify with this form of Islam.
The portrait of this silent majority, as developed in this report by the Institut Montaigne, is the first of its kind in France. The misapprehension surrounding this population is in large part explained by a difficult access to sociological data on Muslims living in France. To address this issue, a large-scale survey of over 1,000 people of Muslim faith or culture was carried out together with Ifop (the French Institute of Public Opinion) using a rigorous and transparent approach.
In the face of a terrorism perpetrated by individuals claiming to represent Islam, the immediate reaction of the State was, and remains, to implement strict security measures. While this response is legitimate at a highly tense moment in time, it cannot suffice to preserve social cohesion and national harmony for generations to come. The speeches and proposals that are bound to emerge during the presidential campaign of 2017 will no doubt be fuelled by prejudice, fear, and even hatred. The hope is not only to provide knowledge in answering the challenges arising from the tragic events of 2015 and 2016, but also to illuminate future debates with concrete and objective elements.
The Institut Montaigne is convinced that it is possible to build a French Islam. But its organisation, its funding, its relations with the State as well as with the so-called ‘countries of origin’ must be transformed; failing this, the social tensions which are heightened by each attack risk becoming unbearable.

Who are the Muslims of France?

The profile of Muslims of France is poorly understood today. In order to compensate for this knowledge gap, the Institut Montaigne, together with Ifop, led a pioneering survey of Muslims living in France, not limited to immigrants or those with an immigrant background. This study represents a critical advance in our understanding of their social characteristics, their attitudes and behaviours. These new data were analysed by Antoine Jardin, Doctor of Political Science and Researcher at the CNRS (French National Centre for Scientific Research).

There are no official statistical data on the socio-demographics of the Muslim population. As such, Ifop resorted to using a very large and representative national sample of over 15,000 people. This method was intended to identify a sub-sample of individuals who identify as Muslim or who have at least one Muslim parent. By applying this method, we can accurately and reliably identify the proportion of people who are Muslim or of Muslim origin within the overall population.

The portrait of Muslims in France is not limited to these common features. They are in fact best characterised by the diversity and differences of opinion among them. A methodical analysis of the survey results identifies three groups:

It is essential to build a French Islam which represents the world in a manner compatible with that of the French Republic. This French Islam, supported by French funding, must produce and disseminate religious awareness, and be able to rely on new women and men emerging from the silent majority of French Muslims.

1 -To build a French Islam, funded on truly representative authorities of Muslims in France: the results of our survey shows a deficit of Islamic organisation’s reputation and legitimacy. More than two thirds of the respondents don’t know what the French Council for the Muslim Cult is. Amongst the 300 respondents who actually know this institution, only 28% feel represented by this body. Achieving this objective depends on two major factors.

2 -  Ensuring transparent financial resources for Islam in France intended for a collective use, in order to see a structured organisation of Islam, to pay the salaries of imams, and to respond to the undeniable social reality that is “the new Islamic pride” felt by many Muslims in France, for whom Islam has become a question of identity rather than religion. This solution will rely on a royalty on halal production as well as on established institutions that are capable of attracting funds.

3 -  Contributing - as far as is permitted by the French Law of 1905 on the Separation of the Churches and State - to the fight against fundamentalist discourse, notably by funding cultural courses and the work of chaplains in all closed settings (schools, prisons, armed forces, hospitals, etc.), as well as through the teaching of Arabic in State schools. All of this in a context where such teaching is very present in mosques and Koranic schools, particularly because nothing of the sort is offered in schools.

4 -  Giving due thought to the absence of Islam from the concordat which even today governs the relationship between religions and the State in the Alsace-Moselle region. It is also worth considering issues of social equality and the State’s capacity to create a theological faculty that can quickly express religious interpretations consistent with the reality of France today.

5 -  Eliminating ambiguities that affect certain local practices (longterm leases, denominational burial grounds, loan guarantees) to assure Muslims that such legal practices are compatible with the French Constitution. These findings have led the Institut Montaigne to formulate a set of concrete proposals for the emergence of a French Islam.

The emergence of a French Islam: proposals from the Institut Montaigne

1
To allow funding of the religion (for the building of places of worship, the salary of imams and theological training) through the Muslim Association for Islam in France, which would utilise the royalties collected on the sale of halal production In detail

In order for French Islam to embrace a theology which is compatible with French society, and so that it may break away from the discourse spread by the puritanical ideologies of certain States, it is necessary to create institutions - administered by a new generation of Muslims - capable of producing and disseminating French ideals and values.

2
To elect a Grand Imam of France in order to conduct the intellectual and theological work required for preparing the ground for French Islam. In detail
3
To extend the 1905 concordat in the Alsace-Moselle region to Islam in order to ensure that Muslim religious leaders are trained in France. In detail

Islam is not included in the concordat of the Alsace-Moselle region but is considered an “unrecognised” religion. As a result, the funding of Islam - and more broadly of any new religion - is not permitted under the agreement which only benefits the four recognised religions (Catholic, Lutheran, Calvinist and Jewish).

Since chaplains are employed by the public service, serving a “function” which by its very essence covers the religious and spiritual domain

6
To teach classical Arabic in State schools in order to lessen the draw towards Arabic classes in Koranic schools and mosques. In detail
7
To develop knowledge on Islam: In detail
8
To create a Secretariat of Religious and Secular Affairs, reporting to the Prime Minister, and encompassing the Central Bureau of Religious Affairs. In detail

This new office will not resolve the multiple questions raised by the current state of relations between the State and different faiths, but it will help to gain a better understanding, and will have the advantage of offering something other than the current security-based response.

Downloads
Report ( 106 pages)
Executive summary ( 3 pages)
In the media
What French Muslims think about France’s secular laws
In the media | 19 September 2016
A study released over the weekend by the liberal Montaigne Institute may provide one of the best snapshots of an often-overlooked aspect of that tension: what French Muslims themselves think about France's secular laws.
Next
Quarter of French Muslims follow hardline Islam: study
In the media | 19 September 2016
A study showing that more than a quarter of French Muslims follow hardline Islam is causing discomfort for the political class, which is united in ignoring its conclusions.
Next
Series |
Next
Report -
Next
| Cohésion sociale | République
...
Next
Séminaire réservé exclusivement
à nos entreprises adhérentes
Restricted to
member companies
Next