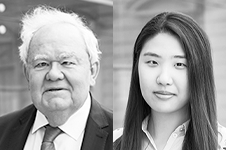 "Can you help me fight your friend so that I can concentrate on fighting you later?" - Liu Xin, CGTN (Chinese state television) journalist, March 19, 2022

"The current state of affairs is constantly changing, and it remains to be seen how the situation in Ukraine will develop."- Feng Zhongping, Director of Institute of European Studies at Chinese Academy of Social Sciences (CASS) and former Vice-President of China Institutes of Contemporary International Relations (CICIR), March 4, 2022

Media and published views are only a proxy for what China’s leaders think. As Xi Jinping likes to recall, the press has a duty to educate the people along lines that the CCP sets. Yet, as the last decade has shown, it has become much harder to publish expert views on international relations that diverge from CCP lines. If anything, the Ukraine conflict is no exception, with large elements of convergence among literally all published analyses and opinions.

Yet there are also nuances and different accents, sometimes even within the same writing. The messaging has shifted from the days immediately preceding the invasion of Ukraine on February 24 and three to four weeks later, where our source collection for this special issue of China Trends ends. This is not happening in a single direction; the tone against the United States has sometimes radicalized. But there are also realistic doubts about the outcome of Russia’s enterprise.

What has happened, of course, is that the situation in Ukraine has become more difficult to ascertain. There had been little anticipation - in China as elsewhere - of the Ukrainian and Western responses in the first place. On the eve of the invasion, Gu Zuhua, a Taiwan affairs cadre from the Shanghai municipality, drew early, and possibly premature, lessons for China and the Taiwan issue. He claimed the two cases to be interlinked and asserted: "we should make good use of military force, and strengthen the anti-independence and pro-unification momentum (善用军事力量，强化反"独"促统大势)"; "we should have the will and determination to dare to fight (敢于战斗的意志和决心)." Eleven days later, Feng Zhongping, former Vice-President of China Institutes of Contemporary International Relations (CICIR), China’s best-informed think tank, dryly noted: "the current state of affairs is constantly changing, and it remains to be seen how the situation in Ukraine will develop."

As the weeks went by, euphemisms about the "situation" or the "crisis" have given way to mentions of the "abyss" or the "tragedy" that Ukraine is descending into. The term "war" is no longer taboo.

As the weeks went by, euphemisms about the "situation" or the "crisis" have given way to mentions of the "abyss" or the "tragedy" that Ukraine is descending into. The term "war" is no longer taboo. Although from the start there were different levels of accusations against the United States, there are now different policy prescriptions for China to follow in some of the comments. The strong opinion by Shanghai political scientist Hu Wei, made on March 5 and translated with his authorization by the US-based Carter Center on March 12, remains, as far as we know, an exception that has quickly been censored in China.

Yet his views on Putin’s failed blitzkrieg and his realist judgment that "China should rejoice with and even support Putin, but only if Russia does not fall" ring like a useful warning a few weeks later.

From the beginning of the war until now, our sources exhibit an element of continuity in assessing the situation in Ukraine and its gravity. The conflict is not about Ukraine; it is about the wider security order and balance of power. This is interesting, as China’s public diplomacy pronouncements generally underplayed the scale of the event: but as we shall see, this was largely to obfuscate the fact that one party - Putin’s Russia - was launching the largest military conflict on the European continent since World War II. On February 20, CICIR analyst Han Liqun notes that "in order to safeguard national security, Russia does not hesitate to use all means at its disposal and break with convention (为维护国家安全，俄罗斯不惜运用一切手腕，不惜打破常规)." On March 17, Huang Jing, Distinguished Professor at Shanghai International Studies University, claimed that: "Russia, with its crushing military superiority, should be able to take control of the situation and thus achieve its basic goal of dismantling Ukraine, severing its military power and cutting off its path to NATO membership." The fact that published views in China did not hide the violence of Russia’s actions shows that for its part, Chinese diplomacy merely held up some éléments de langage, as they are often called at the Quai d’Orsay, to avoid taking an obvious stance on the international scene.

China, of course, parted way from Russia at the United Nations Security Council on February 25, and in the General Assembly, on a resolution to end the war. Yet, on March 23, it was the only member of the Security Council that supported a cynical resolution introduced by Russia that advocated humanitarian corridors and denounced violence against civilians without mentioning Russia’s own role. China has opposed each and every sanction taken against Russia and even their principle.

China has opposed each and every sanction taken against Russia and even their principle.

Several views underline the gravity of the situation and the risk of escalation. One author sees it as a case of game of chicken: "The current crisis has two racing cars rushing towards each other, that wait for the other side to turn the steering wheel first (双方像两台急速冲向对方的赛车，就看哪一方先撑不住转动方向盘)." In fact, several experts do not hesitate to outline the risks of a nuclear conflict. In one case on March 21, Zhu Feng, one of the best known America hands in Chinese academia, even interpreted Putin’s announcement to place nuclear forces in a state of "readiness" as an actual threat of use of force: "Russia has already displayed its determination to launch a nuclear strike if the United States and NATO countries intervene".