The Yellow Vest protesters: the tip of the French social crisis? 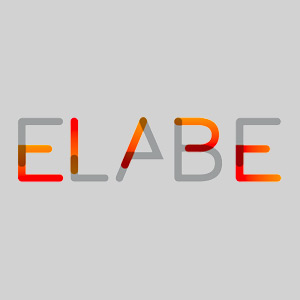 This analysis is the result of a survey conducted between December 14, 2018 and January 8, 2019 by Elabe in partnership with Institut Montaigne. 10 010 people were interviewed divided into 12 regional sub-samples of 800 individuals (1,200 in Ile-de-France) representative of the resident population of each metropolitan administrative region, aged 18 and over. The survey Barometer of Territories - Faces of France covers a wide range of topics (purchasing power, mobilities, social link, social justice, relationship to one’s region or to actors of society… ) and includes one question that enables to determine who identifies as a Yellow Vest protester.

Since the beginning of November 2018 and the start of the Yellow Vest protests, France has experienced a three-fold unprecedented social movement.

Since the social movement begun, it has enjoyed strong public approval (support or sympathy): this approval exceeded 70% in November and December 2018, then dropped but stabilize around 60% early March 2019. The latest Elabe study (20 March 2019) shows that, four months after the start of the mobilization, 53% of French people approve (support and sympathy) the Yellow Vests movement. Comparatively, the social mobilization of SNCF workers' unions in the spring of 2018 was approved by 34% of the French on 14 March, 44% on 4 April and 36% on 23 May.

The horizontal, fragmented and unmediated nature of this social protest, as well as the multiplicity of its modes of action, make it difficult for scholars and commentators to study it. Who are the Yellow Vest protesters? Is this "roundabouts" movement mobilizing more in certain territories, in certain categories of population or does it span the whole of French society? What are the opinions of the Yellow Vest protesters on issues such as taxation, social justice or the European Union? Which political and social actors, if any, do they trust? 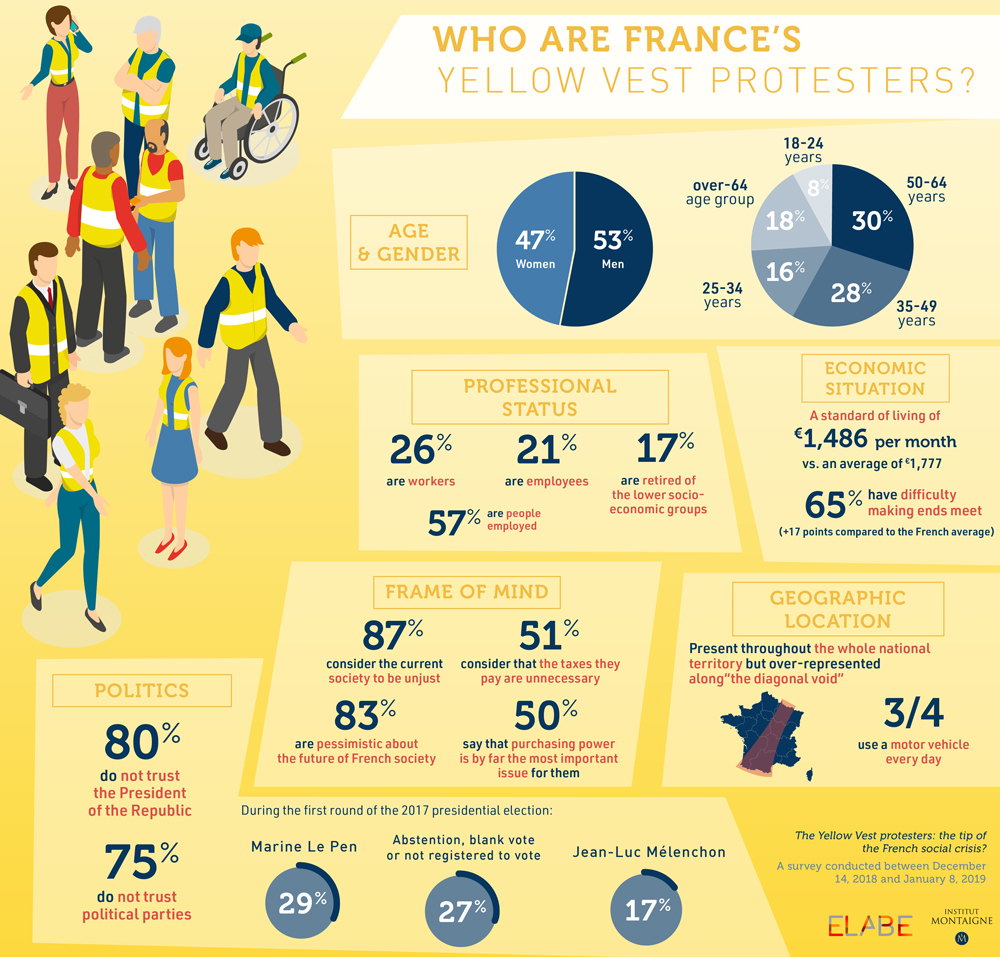 Sociography of a social mobilization

Of the 2,083 people who identify as Yellow Vest protestors, 53% are men and 47% are women, and among those who support the movement’s action and demands, 55% are women and 44% are men. This presence of women is a rather rare phenomenon in major social movements but reflects their growing visibility during demonstrations.

On the other hand, the economic situation of the Yellow Vest protestors is significantly worse than average. Their standard of living is €1,486 per month compared to an average of €1,777 for the whole sample.

Purchasing power crisis and a sense of social downgrading

In the Barometer of Territories, French people tell the story of a happy private life, but of a purchasing power under pressure and of a prevailing feeling of living in a society that produces relegation and exclusion. However, despite these tensions, their personal space is a protective shield against economic and social difficulties.

This tension is all the more acute as Yellow Vest protestors are experiencing a strong and pervasive crisis of their purchasing power:

This growing economic fragility fosters an almost unanimous feeling among Yellow Vest protestors of living in an unfair society (87%, +7) and reinforces the idea that social success is a foregone conclusion (68%, +5). They express a strong sense of downgrading: 69% (+17) believe that their parents lived better than they did at the same age. This perceived social violence weakens their consent to pay taxes: half of them consider that the taxes they pay are unnecessary (51%, +16). Their social anger is also perceived in matters that are most upsetting to them, which are solely economic and social issues. Their anger is mostly triggered by the gap between high and low wages (46%, +8) and social inequalities (35%, +5), but also on tax fraud (26%, +1), job insecurity (26%, +4), corruption (25%, +5), and welfare fraud (24%, -3). We observe that only 7% (-1) of Yellow Vest protestors are upset by territorial inequalities, proof of the predominance of social divides over territorial ones in the anger expressed.

Similarly, Yellow Vest protestors consider that it is civil society and local actors, such as companies (54%, -8), the mayor of their municipality (48%, -6) and non-profit organizations (46%, -3), who have the most power to make the world in which they live evolve. The main difference between the answers of Yellow Vest protestors and those of the whole sample surveyed is the power attributed to the President of the Republic: for the former a third of them believe that he has the power to change things (36%) whereas for the latter half believe so (50%). Therefore, not only the Yellow Vest protestors do not trust the current President of the Republic, but they also think he is incapable of acting on the reality and daily life of the French people.

The picture depicted here, combining a crisis of purchasing power, a feeling of injustice and widespread mistrust of social actors, leads to a pronounced feeling of pessimism. A majority of Yellow Vest protestors are pessimistic about their personal future (58%, +14) and that of their children (57% think that when they reach their age their children will live less well than they do, +11), and almost unanimously about the future of French society (83%, +8).

A relationship with the territory that exacerbates the social crisis

In the study Faces of Frances, the Barometer of Territories identified four categories of French people according to their relationship to the territory and to mobility (social, personal and geographical).

The Yellow Vest protestors are very largely “Assigned” (39%, +14) and “On the edge” (29%, -2), in other words 7 out of 10 Yellow Vest protestors feel like they are suffering from their living conditions (professional situation, location of life, etc.). As we have already pointed out, they are very strongly affected by the purchasing power crisis, to which is added the impression that they are also suffering from territorial inequalities:

This does not mean that Yellow Vest protestors are only present in areas which are most in need. With respect to the INSEE’s typology of territories ("territoires de vie") based on objective indicators of access to services and quality of life in a given area, we observe that between territories "rather privileged", "rather well-off", "not very favourable", "in an intermediate situation" or "isolated", the proportion of Yellow Vest protestors varies between 17% and 28%. Hence, their presence on all types of territories confirms that the emergence of this social movement is not rooted in territorial inequalities, but in the social crisis pervasive to large sections of French society.

Their presence on all types of territories confirms that the emergence of this social movement is not rooted in territorial inequalities, but in the social crisis pervasive to large sections of French society.

Finally, while the Yellow Vest protestors are mainly "Assigned French" and "French on the edge", a significant proportion of them are "Rooted French" (18%, -4) and "Emancipated French" (14%, -8). Their presence among population groups with the highest socio-economic and cultural capital and who are the happiest may come as a surprise, but it explains well the diffuse nature of social anxiety in the country: 78% of French people consider the current society unfair (including 28% very unfair).

Politicization of the Yellow Vest protestors and European elections

The strong mistrust of Yellow Vest protestors towards institutional actors leads logically a majority of them to declare that they do not feel close to any political party (33%), or to express a proximity to protesting parties, in particular the right-wing Rassemblement National (19%) and to a lesser extent to the left-wing La France insoumise (10%). During the first round of the 2017 presidential election, 29% of Yellow Vest protestors voted for the right-wing candidate Marine Le Pen, 27% abstained, voted blank or were not registered to vote, and 17% voted for the left-wing candidate Jean-Luc Mélenchon.

The mobilization of sections of the population traditionally missing from social protest, and their politicization since the beginning of the social movement, could, if confirmed, have an impact on the results of the European elections in May 2019. In this context, it is important to note that 61% of Yellow Vest protestors consider that France's membership to the European Union has more disadvantages than advantages (+18 compared to the French average). More than 6 out of 10 also consider that the European Union does not control migration flows and does not protect them from the negative effects of globalisation. Although the European Union is not (yet?) at the heart of their demands, it could become the target of their social anger at the polls.

However, they are among the French who are experiencing the most violently the crisis of purchasing power and express with the most intensity this feeling of injustice. This double phenomenon has a direct impact on their daily lives and undermines their personal happiness, which so far has resisted the crisis among the majority of our fellow citizens.

If France is in pieces, these four categories ("Emancipated", "Rooted", "Assigned", and "On the edge") are not hermetically sealed. The Barometer of Territories confirms that Yellow Vest protestors are only the most visible part of a social suffering that now permeates large parts of our society and undermines confidence both in the future and in the effectiveness of the political system.

See also
Faces of France - The Barometer of Territories 2019
Publication - February 2019
The conclusions of our Barometer sketch a portrait of the French people of today, and signal an original paradox: they share a widespread feeling of private happiness, but the...
Next
Social Issues
At the Roots of the Social Divide: Different Faces of France
ARTICLES | 28 February 2019 | Bruno Cautrès
On Tuesday, February 19, Elabe and Institut Montaigne published the Barometer of Territories 2019: Faces of France, an unprecedented survey of 10,010 French people. The survey highlights new social and territorial dynamics, in a context marked by social movements and the upcoming European and...
Next
SIGN UP FOR OUR NEWSLETTER
for a handpicked selection of analyses each week Yes please
Dossier |
Next
Publication -
Next
Cohésion sociale
...
Next
Séminaire réservé exclusivement
à nos entreprises adhérentes
Restricted to
member companies
Next