These territorial oppositions are regularly invoked to explain the French society’s woes and divides. The context is one pervaded by a strong sense of inequality and injustice, and by the fear of being downgraded. In 20 years, France’s social and spatial structure has changed. Jobs are more and more concentrated in the heart of metropolitan areas, while housing is increasingly clustered in peri-urban areas. Some French people have been able to benefit from these recent societal developments, while others have felt left out. This social distress has significantly impacted the French society.

The 2019 Barometer of Territories, led by Elabe and Institut Montaigne, analyzes the impact of these divides on the French social cohesion. By interviewing over 10,000 people, we sought to understand they key factors that sparked these divides: what role has geography played? What about socio-economic factors? What is the relationship between the French and their territories? Are the latter places in which they can fully thrive and flourish, or on the contrary a space that restrains them?

The conclusions of our Barometer sketch a portrait of the French people of today, and signal an original paradox: they share a widespread feeling of private happiness, but the latter is struck by a sense of inequality and injustice. These feelings are also modulated by the relationship the French have with their territory and their mobility, the latter being either imposed or chosen. Thus emerges the image of a France more fragmented than shattered.

"The Barometer of Territories reveals that social divides are more decisive than territorial divides in understanding the life course of French people. These social divides the French society into four key categories of people, who coexist and come across each other quite widely within the same territories. Thus several faces of France appear. Yet these different faces express a common attachment to their country and, through this attachment, perhaps the aspiration to or the hope for a common destiny."

"The Barometer of Territories provides a new perspective on the dynamics at stake in our society, particularly at a time when the Yellow Vests movement is taking place. It describes a happy French society, more attached to its country than to its territories, but struck by a feeling of injustice. The latter can only be resolved by significant work coming from public authorities."

Survey
A sample of 10,010 people, divided into 12 regional sub-samples of 800 individuals (1,200 in Ile-de-France), each representative of the resident population of each metropolitan administrative region, aged 18 and over. The regions of Corsica and Provence-Alpes-Côte d'Azur were merged.

Sample selection
The representativeness of the sample was ensured by the quota method applied by region to variables such as gender, age, socio-professional category and agglomeration size.

Questionnaire
The survey is divided into five sections: "Confidence and view of one's quality of life", "Social bond", "View of one's territory", "Relationship of the territory with the state and the European Union", and "Vision of society".
In total, the questionnaire includes 120 questions. 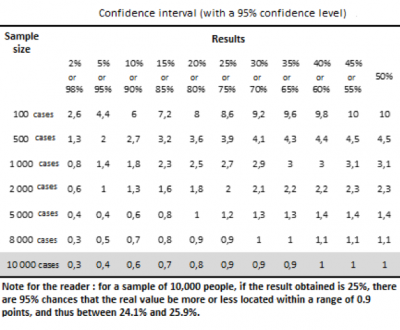 Both happy AND unhappy: a paradoxical portrait of the French

Over the last few decades, France has undergone major socio-economic and societal changes. Globalization and the effects of European integration have generated more economic flows, more social mobility and more territorial connections. At the same time, these changes have generated fears, instability and uncertainty among many French people.

By combining data on social cohesion, people’s assessment of their private happiness, their views on housing and the places they live in, the sense of social justice, expectations compared to realities in terms of quality of life, or even access to public services and infrastructure, we are able to draw an original portrait of the French people. The latter exemplifies a paradox summarized by sociologist Jean Viard in his famous formula "private happiness and public distress".

First lesson of our survey, the French evaluate their personal life positively:

In most regions, this positive outlook also extends to the local territory:

But as soon as we move away from the personal and local sphere towards issues that affect their economic life or that of the country, hints of pessimism become perceptible. Private happiness is being hit hard by the fall in purchasing power and the now prevailing feeling of relegation and exclusion:

This fall in purchasing power and the representations of an unequal and unjust society undermine the French people’s confidence and their ability to project themselves into the future:

Despite this social distress, the reference to France remains the most unifying pillar, far ahead of other French territories:

Mobility and life choices: territories at a crossroads

This ambivalence between private happiness and public distress is embodied in the relationship the French have with territories and mobility. Territories are the places where they thrive in their personal, family, social and professional lives, but have they chosen to live where they live? Have they chosen whether or not to stay in a particular territory, or to leave one territory for another? While mobility is neither good nor bad in itself, it can be perceived in radically different ways, depending on whether it is chosen of imposed.

Deliberate mobility, assumed rootedness, constrained confinement to a specific territory... We have identified four different types of relationships to mobility that coexist on the French territory, and have linked them to socio-demographic characteristics:

21% of French people are free from territorial and social constraints. They have little territorial attachment, they carry out their life project without hindrance, or they have the socio-cultural means to overcome obstacles, seize opportunities and take advantage of changes in our society, such as the digitization of our personal, social and professional lives, the European Union or globalization. 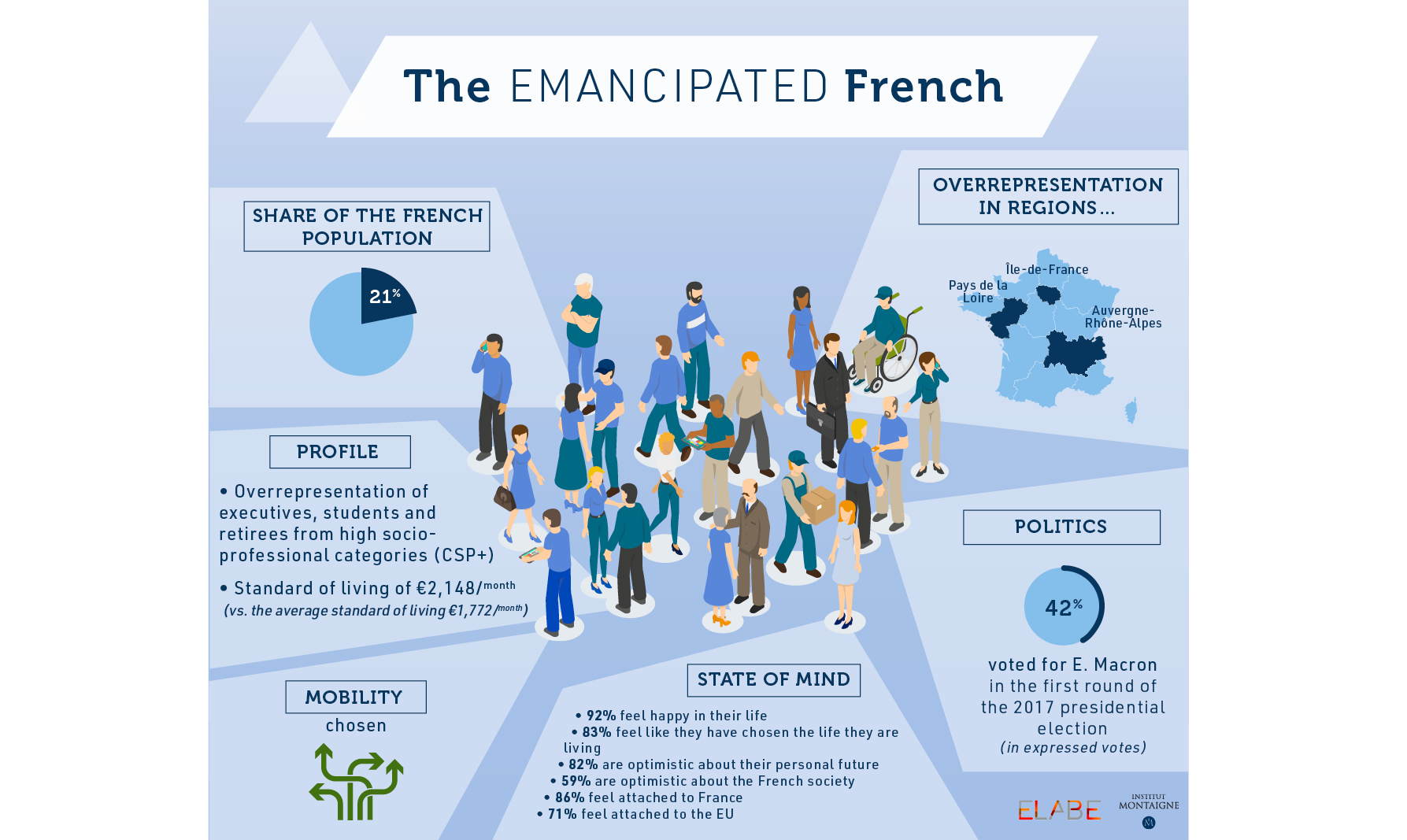 22% make a firm choice to take root in their territory. Happy to live where they have chosen to live, their personal bubble is a shield that protects them from social violence, yet without concealing it. 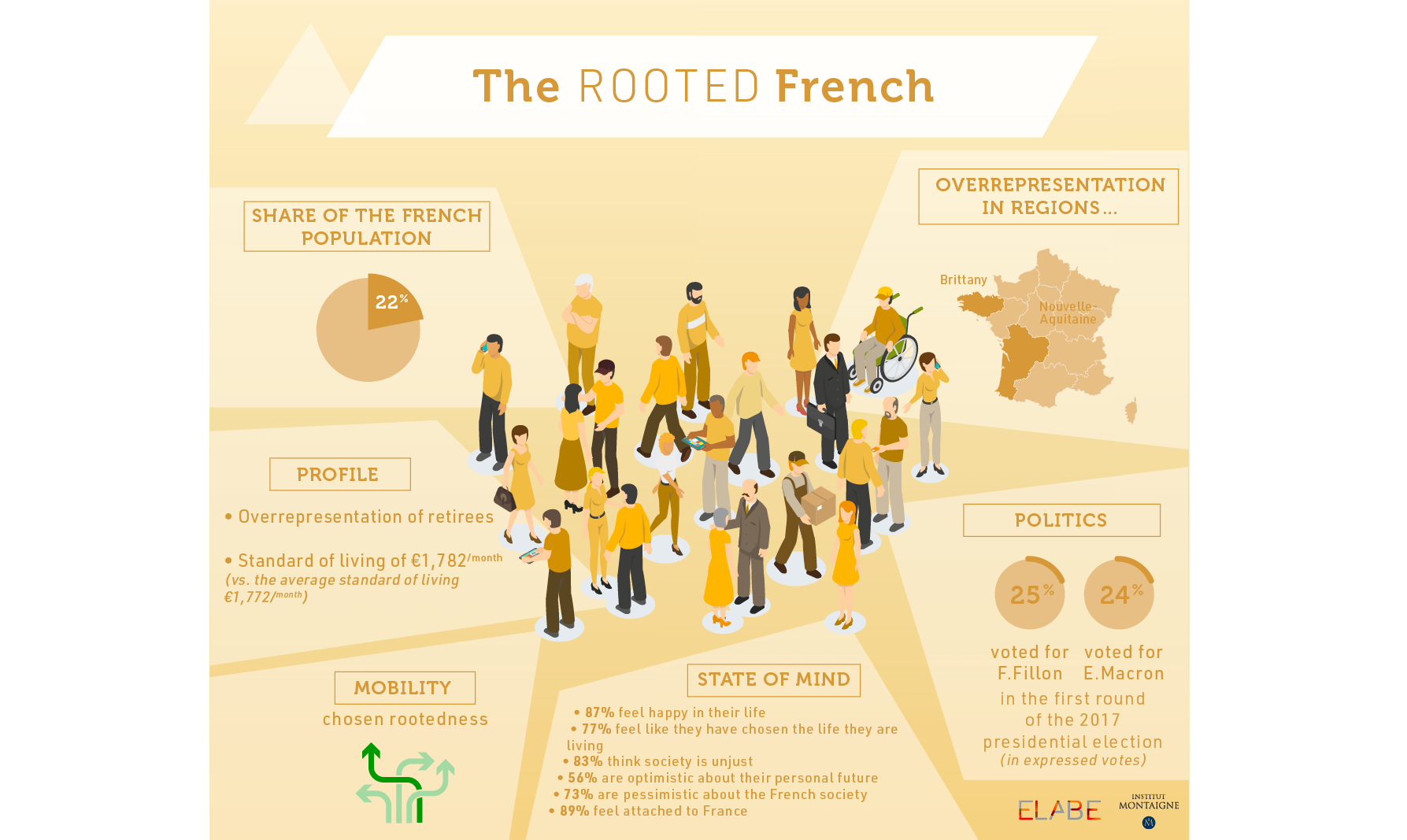 25% are assigned to their territory and suffer from social and territorial inequalities. They are stuck, both geographically and socially. They envision their future and that of their children with pessimism. 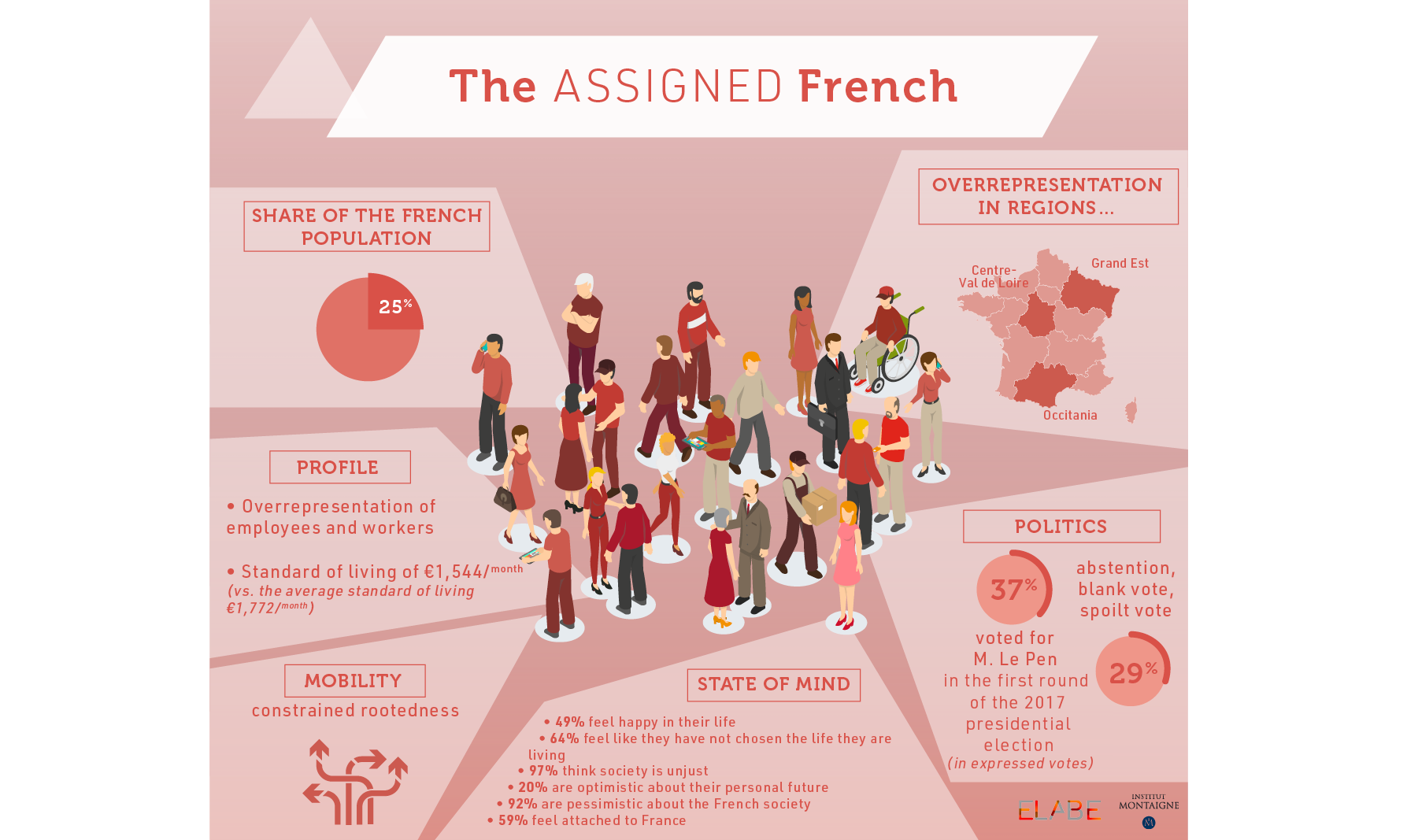 The French on the edge

32% experience a strong tension between their aspiration to social and territorial mobility and the difficulty in emancipating themselves from their socio-economic situation and from territorial inequalities on the other. 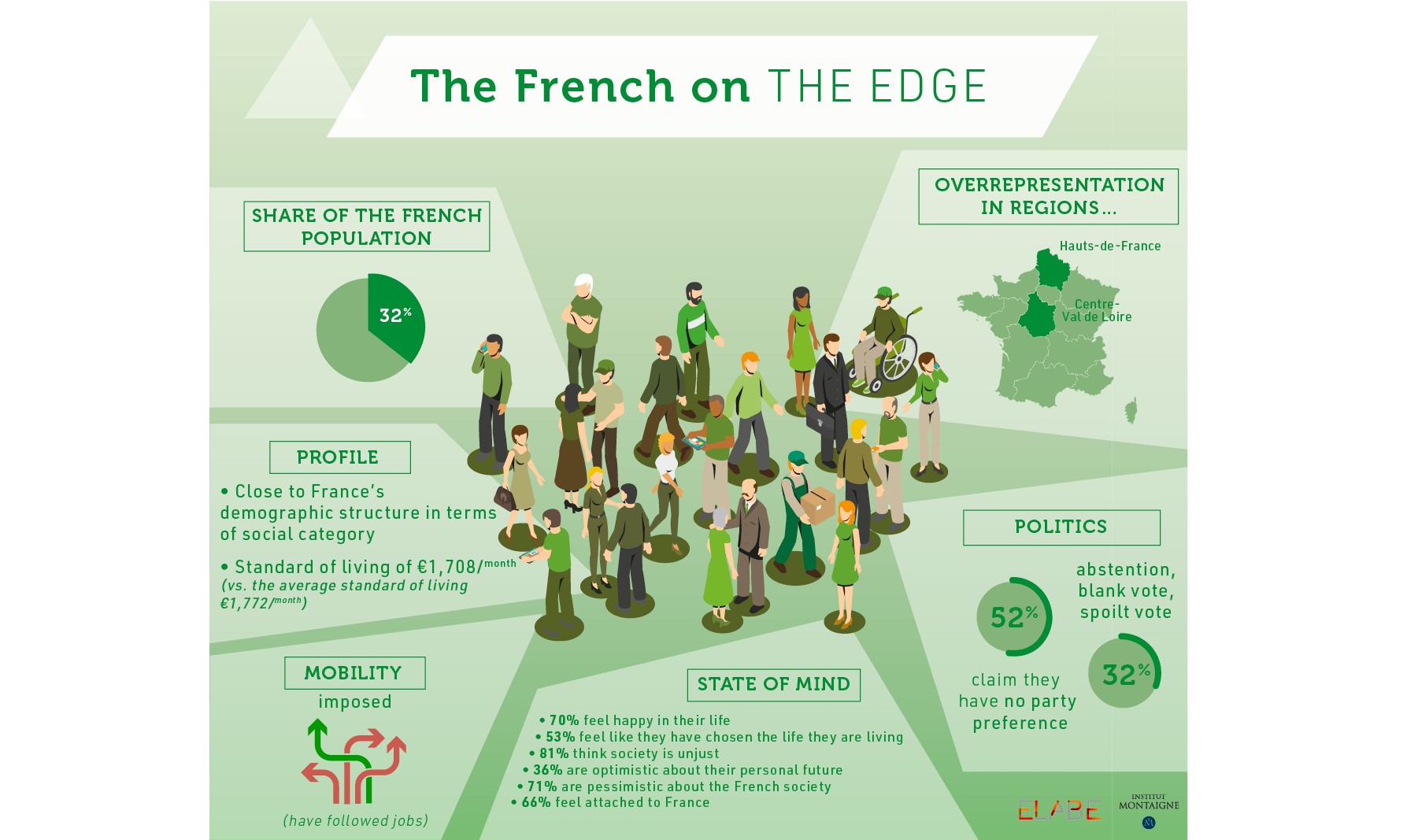 Individual fragility of French citizens is either dampened or amplified by the organization of territories, their socio-economic topography and the quality of public services. However, one major lesson of this Barometer of Territories is the crucial influence of one's perception of his purchasing power and his socio-cultural capital. These factors are in fact more important than the objective features of areas where citizens live in (infrastructures, access to services, and so on) on their relationship toward society and toward their own life course. Hence, this conclusion tells us how in France the social divides remain more important than the territorial ones.

The French have a positive view of their country and territory. The vast majority of them view positively the place in which they live, find it to offer a satisfactory quality of life and are quite confident about its future.

However, several pessimistic signals should be highlighted: the feeling of social injustice shared by 78% of respondents, that of finding it difficult to make ends meet for 49% of respondents, or even the challenged consent to taxation - 36% of French people consider that taxes are useless.

"Private happiness, public distress" is thus a good way to summarize the leitmotiv of a France not divided into metropolitan areas and rural areas, but split according to the relationship citizens have with their territory, and in particular to whether or not they have chosen to live there. The choice of the territory in which we find ourselves, rather than the characteristics of the territory itself, is what allows us to categorize the French into the four different profiles (emancipated, rooted, assigned, on the edge) we have delineated.

Downloads
Synthesis ( 11 pages)
In the media
French EU attitudes
In the media | 27 February 2019
New research suggests that France is deeply divided in its attitudes towards the EU, with just a third of the country describing themselves as 'attached' to the European Union.
Next
So denken die Franzosen über ihr Land
In the media | 27 February 2019
Die französische Gesellschaft ist tief gespalten. Laut einer neuen Studie empfinden fast 80 Prozent die gesellschaftliche Ordnung als ungerecht.
Next
Series |
Next
Document de travail -
Next
...
Next
Séminaire réservé exclusivement
à nos entreprises adhérentes
Restricted to
member companies
Next