Stronger Together - Germany: a Clear Threat Perception but an Abstract Debate 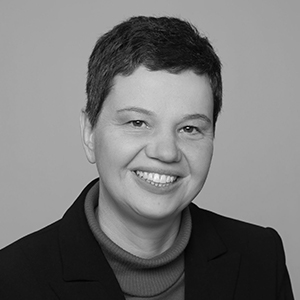 Federal President Frank-Walter Steinmeier stated on 12 November 2020 that "We Germans must understand that a strong Europe is our investment in a transatlantic relationship". This statement proves once again that Germany’s approach to greater security and defense efforts at the European level primarily serves the goal of preserving American security guarantees. Europe is, in Germany’s eyes, still not considered as an alternative security provider. Ronja Kempin, Senior Fellow of the EU/Europe Research Group at the German Institute for International and Security Affairs (SWP) in Berlin, looks at security differently than her country’s government does: she has been an advocate of the strategic autonomy of the European Union and considers it a key task for the Franco-German motor to describe the path towards this autonomy, while advocating that the European Commission be given all the competences necessary to create a single European armaments market. For this fourth chapter, we have asked Ronja Kempin to shed light on her government’s position and draw conclusions from it to further the discussion on European defense.

Germany’s debate on security and defense politics is still rather abstract, - although in year seven of the famous Munich consensus. In February 2014, then Federal President Gauck (SPD), then Foreign Minister Frank Walter Steinmeier (SPD) and then Defense Minister Ursula von der Leyen (CDU) similarly stated that Germany should "get involved earlier, more decisively and more substantially" in conflict resolution. This cross-party consensus also characterized the 2016 Federal Government's White Paper on Security Policy and the Future of the Bundeswehr.

Of course, a lot has happened in international relations since then. In November 2020, German Defense Minister Kramp-Karrenbauer named the most important threats from the country’s perspective: "The results of the presidential elections in the United States of America have presented us with old challenges and have opened up new options in international politics, including in security and defense policy. […]. In Nagorno-Karabakh, the first real drone war in human history has just been conducted. China has just finalized the world's largest free-trade agreement with fourteen other Indo-Pacific countries. This agreement illustrates how the global balance of power is shifting towards the Pacific region. Russia is relentlessly continuing to equip itself with conventional and nuclear missile systems, which essentially amounts to rearmament […]. And all of this while the Covid-19 pandemic continues to spread across the world." The security and defense political establishment in Germany adds that trade routes and supply chains are coming under pressure; that we are confronted with cyber attacks staged by states or by entities close to states, many of them targeting democratic institutions or critical infrastructures; that authoritarian systems are expanding while trying to rewrite and distort international law; that ever more states oppose the Western model of an open society, democracy and the rule of law; that state-of-the-art weapon systems - virtually impossible to defend against - are being deployed; and that terrorism, especially Islamist terrorism, remains a plague. The biggest concerns in Berlin, however, are caused by the uncertainties that NATO and the EU are facing. Two questions are of prime importance: How reliable is the United States under the Biden administration? And will European states be able to rely on each other when necessary?

Two questions are of prime importance: How reliable is the United States under the Biden administration? And will European states be able to rely on each other when necessary?

Donald Trump’s election as President of the United States was a shock for Berlin. But although the American President never tired of criticizing Germany the most of all the Allies, Berlin did not, as Barbara Kunz demonstrated, draw the conclusion that Europe inevitably needs a "plan B" to compensate for degrading transatlantic relations and increasing uncertainties regarding US security guarantees. The country has strongly felt that "the times when one could rely on others are somewhat over". Nevertheless, this conviction was not followed by concrete ramifications in defense policies.

With the Trump administration gone, we can expect to see Berlin playing its traditional fanfare, praising the United States as Germany’s most important ally in security and defense policy. There is unison that Germany and Europe depend on America’s nuclear and conventional capabilities to protect itself. Thus, Berlin seeks to find ways to ensure that the US continues to commit to defending Europe while shifting its strategic focus to Asia. Berlin is currently striving in different ways to attract the US’s interest in Europe. On the occasion of the 65th anniversary of the Bundeswehr, Federal President Frank-Walter Steinmeier stated on November 12, 2020: "With regard to security policy, I see our country as having a dual responsibility. For Germany, the development of an EU capable of taking action in defense policy is as pressing as the expansion of the European pillar of NATO. We Germans must understand that a strong Europe is our investment in a transatlantic relationship. […] If we invest in Europe, then other Europeans will follow our lead. It will cost us more […]. But despite notable progress, it will be a long time before the European Union will be able to guarantee all its members’ security on its own. Counting solely and merely on the EU would mean driving a wedge through Europe. We will continue to urgently need the strongest and largest partner in the Alliance. But only a Europe with the desire and ability to protect itself credibly will have the best chances of keeping the United States in NATO".

The following five consequences arise from these statements for European defense:

Berlin seeks to find ways to ensure that the US continues to commit to defending Europe while shifting its strategic focus to Asia.

Accordingly, one must conclude: Nothing new from Germany. Because NATO and the US are the supreme reference points of German security and defense policy, European defense has only two tasks. First, in future, it must credibly prove that Europe is capable of acting when its security interests (which will no longer always be those of the US) are in danger. This form of sovereignty can nevertheless be established within the NATO framework. Second, in the EU, security and defense policy has the function of an integration project. The focus is on convergence and improved coordination of the member states, but not on operational issues. But is this enough to live up to Germany’s own claim of being able to "speak more European in order to remain transatlantic"? A new federal government will have to decide on this from autumn 2021.

See also
Europe / World
Stronger Together - Charting a Way Forward for European Defense
ARTICLES | 15 February 2021 | Mahaut de Fougières
The Covid-19 crisis has once again proven the need for more cooperation between European member states in times of crisis. It is also an example of the EU's ability to overcome its differences and design a common response, as demonstrated by the 750 billion euro recovery plan that member states...
Next
Europe / World
Stronger Together - Finland: Time to Focus on Tangible Results
ARTICLES | 23 February 2021 | Juha Jokela
Finland is confronted with increasing geopolitical and geoeconomic rivalries, deriving from global challenges like climate change and the economic crisis due to the Covid-19 pandemic, and coupled with great power tensions that add to its key security challenges. Although Finland is a member of the...
Next
SIGN UP FOR OUR NEWSLETTER
for a handpicked selection of analyses each week Yes please
Dossier |
Next
Publication -
Next
...
Next
Séminaire réservé exclusivement
à nos entreprises adhérentes
Restricted to
member companies
Next