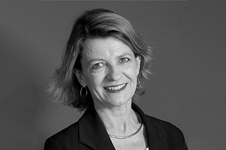 With a long experience in the public and private sector, Agnès Audier is a board member of large listed companies, Senior Advisor at Boston Consulting Group, and an expert on digital and social issues. She has been focusing on public policies concerning exclusion and mobility for 25 years. She has offered her expertise to various major private and public firms, as a specialist in social and digital transformation.

The opinions expressed herein do not necessarily reflect those of the aforementioned people or the institutions they represent.

Institut Montaigne expresses its grateful thanks to the following people in particular for their contribution to this work.

The office of the president of the department of Seine-Saint-Denis and departmental services.

Stuck between notoriety and opportunity, Seine-Saint-Denis is not just a regular suburb. France’s poorest department will also host the 2024 Summer Olympic Games, and is home to the headquarters of major companies. Located in the Greater Paris area, and with a population of 1.7 million, this department walks the tightrope between decades of semi-successful public policies and real socio-economic assets.

Why is Seine-Saint-Denis, sitting right next to France’s capital, still facing such high barriers to employment and development? What is keeping its inhabitants from accessing the opportunities available to other French residents? And, most importantly, what are the solutions for the current and future inhabitants of Seine-Saint-Denis?

Seine-Saint-Denis was the second largest industrial area in Europe until the middle of the 20th century. In the 1970s, it underwent a period of rapid deindustrialisation, and its largely working class population has been struggling with unemployment and a lack of economic integration ever since. The French government has attempted to implement a series of policies in this department, which have yet to yield their best results.

Seine-Saint-Denis complexity, both social and economic, merits particular attention and is an important case study in public policy for France and beyond.

Its complexity, both social and economic, merits particular attention and is an important case study in public policy for France and beyond. While Seine-Saint-Denis has its own distinct features, the challenges of employment and inclusion in developed countries are by no means unique. The broader imperative of this study is to encourage the thorough and localized examination of public policies in such areas. After witnessing how the effects of Covid-19 were amplified amongst vulnerable populations, it is all the more important to zoom in on the case of Seine-Saint-Denis in this phase of post-crisis political reflection, in order to understand the causes behind its economic struggle, and to avoid ineffective blanket policies.

With the support of J.P. Morgan, Institut Montaigne carried out a study on the access to employment and economic inclusion in Seine-Saint-Denis. Our purpose is to provide a better understanding of the implementation of national public policies in this department, as well as of the actions of local authorities, and to propose concrete solutions.

We believe that a better cooperation among the various actors and stakeholders in Seine-Saint-Denis is necessary for the optimal implementation of policies there. Our work led us to interviewing over a hundred local actors, and to understanding the potential of a better coordination between companies, the Social and Solidarity Economy and local authorities. We will hence lay out the opportunities that we see with regards to the major construction projects planned in Seine-Saint-Denis over the next 20 years, as well as a possible digital transformation of the area. 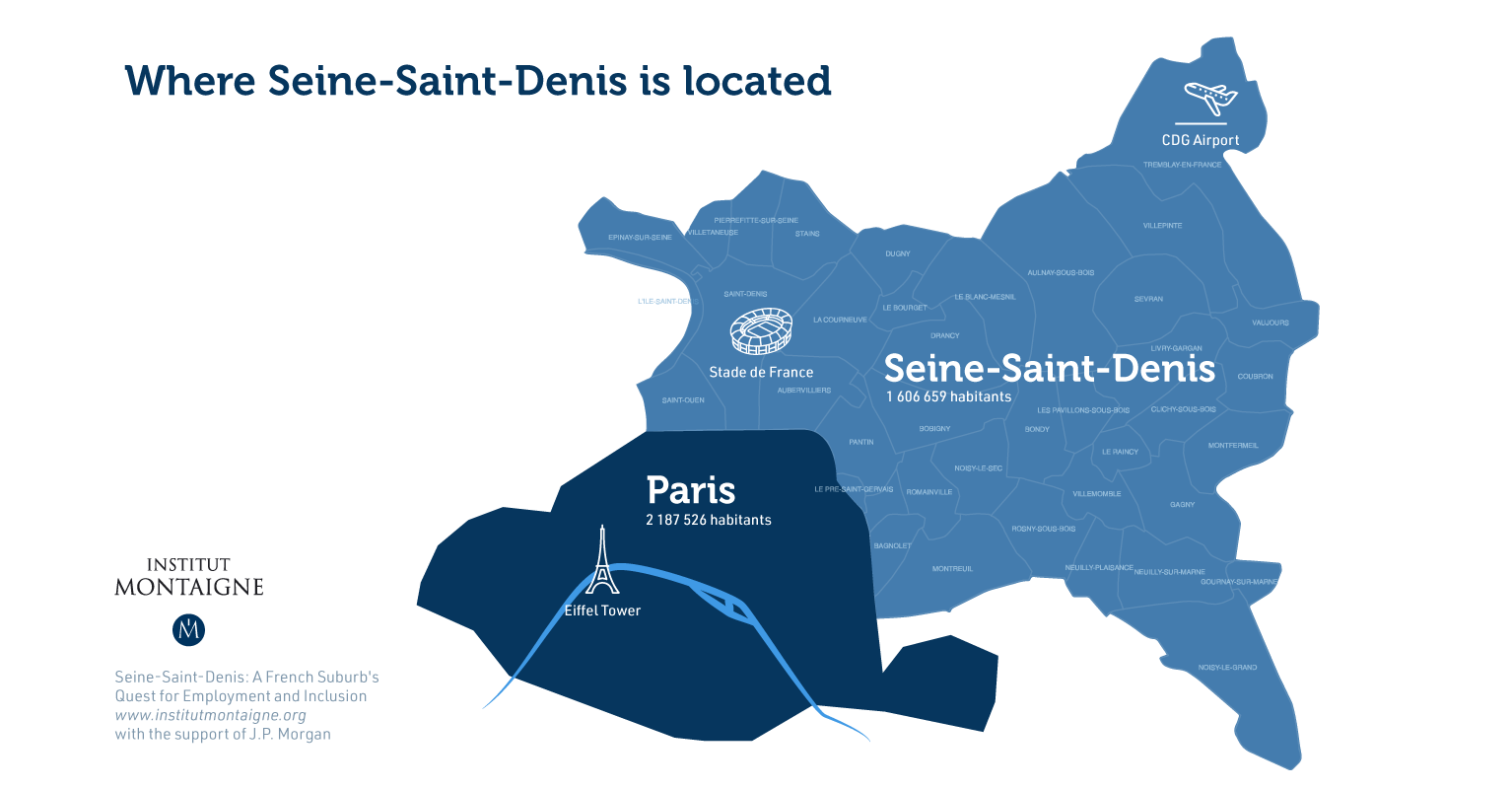 Need some context? Five things you need to know:

The name of department 93, situated in the north-east of Paris, and made up of 40 communes. It has a population of almost 1.7 million, and a surface area of 236 square kilometers. Its inhabitants are called the Sequanos-Dionysiens.

Revenu de solidarité active, is a French welfare benefit in the form of income support, designed to assist those facing barriers to employment.

The name given to the body of policies of the French government, aimed at the socio-economic development of certain urban areas. The quartier prioritaire de la politique de la ville (QP) is a designation of a number of priority neighbourhoods needing the most urgent attention with regards to reducing inequalities and barriers to economic integration. There are 63 QPs in the department of Seine-Saint-Denis.

Meaning city contract, this is a tool that is used in the framework of France’s urban policies in order to fix and organise projects in the neighbourhoods and departments included in the politique de la ville.

How well do you know Seine-Saint-Denis?

The paradoxes of Seine-Saint-Denis

The palpable poverty and development challenges in Seine-Saint-Denis are alarming:

However, there are a few elements to consider:

The western part of the department is overall less developed, and characterized by higher population density and communal living. The socio-economic difficulties are more distinct here, paired with higher barriers to economic opportunities. On the other hand, the eastern part of the department faces less challenges, and is also characterized by large residential areas and a lower population density.

Companies from the service sector have been moving to Seine-Saint-Denis since the 2000s, bringing with them more employment opportunities than elsewhere in the country. Unfortunately, these opportunities remain inaccessible to the Sequans-Dionysians, although the rate of new jobs in the department increases much faster than that of people employed (+8.5% vs. +0.9%). There is an overabundance of jobs that require higher qualifications than are available to the inhabitants of Seine-Saint-Denis (1.3 positions per employed person). Meanwhile, there is not enough demand for the blue collar work that the local labour can provide (6 positions per 10 employees). As a result of this skill mismatch, both the companies and the local workers need to look outside the department for labour and employment. 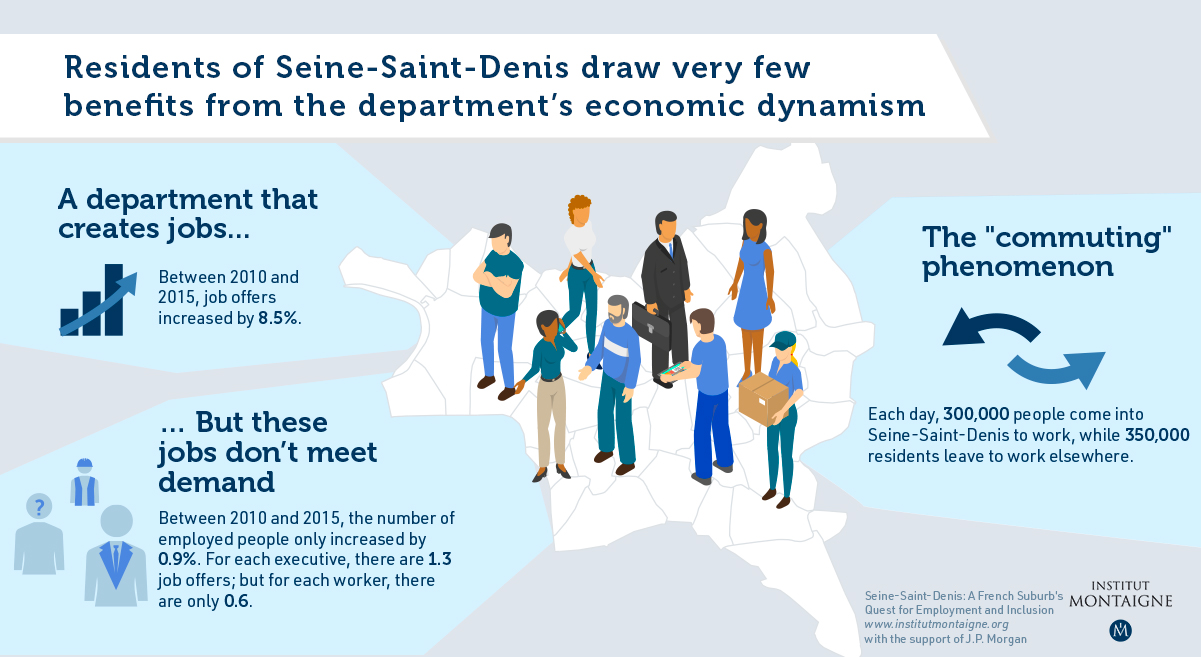 There are 63 high-priority neighbourhoods (QPs) in Seine-Saint-Denis, as per France’s national urban policy. In these neighborhoods, the newcomers have less income than those who are already residents, who in turn have less income than those who eventually move out. These neighbourhoods therefore facilitate the transition into the middle class for those most vulnerable. The high turnover rate of inhabitants who reach a certain income level can therefore help to explain the permanent socio-economic stagnation in the department.

The politique de la ville at work in Seine-Saint-Denis

While much remains to be done, the politique de la ville has been employing various instruments to boost the socio-economic development in Seine-Saint-Denis:

Significant mobilization of the government and local authorities

The government has been focusing on Seine-Saint-Denis for decades now, with the aim of reducing inequalities and improving the living conditions of its disadvantaged populations. This began with the Habitat et Vie Sociale (habitat and social life) processes in 1977, which led to numerous projects and designations, such as the quartier prioritaire (QP). These operations all aimed to boost investment and urban renovation in departments like Seine-Saint-Denis.

Seine-Saint-Denis has provided the space for the construction of some significant sites, such as the Stade de France, France’s national stadium, built in 1995. Undertakings such as this, expected to grow in the next 20 years, paired with the right actions by public authorities, can be used to increase access to employment in the department.

20 billion euros have been allocated to five major projects (Greater Paris, the Cité olympique hosting the Summer Olympics, the addition of terminal 4 to the Roissy airport, the CDG express railway line and a new hospital), currently or soon-to-be underway.

Making the players cooperate: a matter of efficacy

There is ample to be discussed with regards to the funding, or the lack thereof, of various areas of Seine-Saint-Denis. However, our study rather aims to focus on the cooperation between local actors as a means of improving the resources and tools that are already at the disposal of the department. We believe that by improving the coordination of the various actors at play, the department will see significant improvement in the implementation of public policies that have been less than successful thus far.

What drives the actors’ behavior in Seine-Saint-Denis?

The actors and stakeholders tend to be driven by individual interest. This often leads to inefficient competition, and incompletion of projects that are complex and require long-term work.

There are two tools that are available to actors to carry such projects out: city contracts, and the call for projects. As it happens, these tend to slow down cooperation.

What tools do the actors use to carry out projects?

First off: contracts, specifically known as city contracts. Since 2014, these instruments aim to put in place projects that advance social, urban and economic development. Here is why this contractual method is not optimal:

The second tool is the call for projects. Favouring the strongest proposal, these tend to leave out actors from the Social and Solidarity Economy, as well as collective reflections about common objectives. Thus, actors in Seine-Saint-Denis rarely find themselves in a situation where they need to put their heads together and cooperate, even if they would benefit from sharing their respective know-hows and resources.

We have identified nine points on which the actors could increase their efforts for collaboration:

We will zoom in on two of these elements: HR management of public officials, and RSA funding.

The lack of HR management strategy of public officials and civil servants seems to be a cause for the inefficiency of the government in the department, especially with regards to education. Oftentimes, young teachers are sent to the schools where the students are most in difficulty, which leads to a high turnover rate for teachers. 35.7% and 50% of primary and middle school teachers do not stay longer than two years in the same school. Moreover, there is only a 51.26% successful replacement rate for teachers who leave, as opposed to 78.41% in the rest of France. Sometimes students may miss out on a whole academic year due to this. 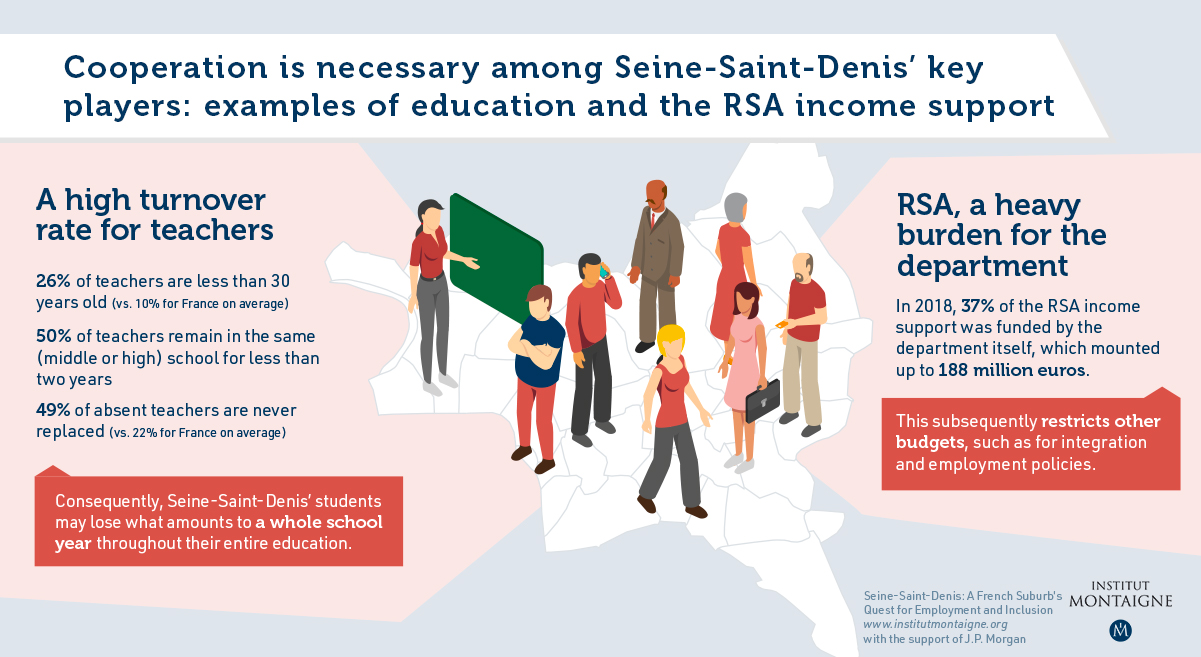 The funding for income support, known as RSA in France, presents a heavy burden for Seine-Saint-Denis. The department council needs to generate 215.2 million euros to continue funding RSA, which it can barely continue to afford if it receives no help or compensation for it. If this continues, the department will have no choice but to carve out from the budget dedicated to other employment and inclusion policies, coming full circle in the inefficiency of the process.

A potential hub for digital experiments?

Seine-Saint-Denis has an enormous potential for a digital transformation. On the one hand, the challenges of the department present the perfect incentives to find creative digital solutions. On the other hand, there are real assets in this department that could ensure a successful transformation. Such is the young population, its proximity to Paris, and access to the most digitally dynamic labour markets in France. Here are three possible ways to approach this:

Four objectives for employment in Seine-Saint-Denis, and how to reach them