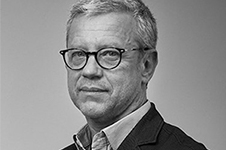 Geopolitics expert, Bruno Tertrais is Deputy Director at the Foundation for Strategic Research.

We are reaching a turning point in the history of mankind.

Will the global population exceed 11 billion by 2100? This is the latest UN forecast, based on a world population growth of 1.10% per year. While this figure may be hypothetical, it is telling of the demographic changes we are currently experiencing.

Resources, climate, conflicts, migration, urbanization, aging, geopolitics... Today, demography is at the heart of all major contemporary societal issues. Each area of the globe is affected differently by population trends. Africa, for instance, has not yet completed its demographic transition, while an aging Europe is expected to see its population stagnate, and then shrink by 2050. Asia is a very diverse territory, and encompasses a Japan in decline and an India in full boom.

In reaction to this multitude of changes, a large number of myths are emerging. These are sources of concern among the ruling classes as well as within civil societies. Will we all be able to live on planet Earth in 2100? How will we cope with migration flows? What impact will demographic changes have on global geopolitics, conflicts and climate?

Underestimating the societal, environmental, political and geopolitical effects of demographic and migration trends would be a mistake.

Nevertheless, it is essential to privilege an analysis of these developments based on facts. The demographic issue is too often the topic of passionate and irrational debates, particularly regarding the migration issue. Moreover, demographic and economic growths are too often associated with one another, while the age pyramid, the situation of the labor market, the institutional, political, legal and cultural landscape are often disregarded. The aim of this paper is therefore to emphasize, in an objective way, the forecasts of population trends and the challenges they will raise for our society.

WHAT ARE THE CHALLENGES...

In demographic terms, Europe is an area in decline. 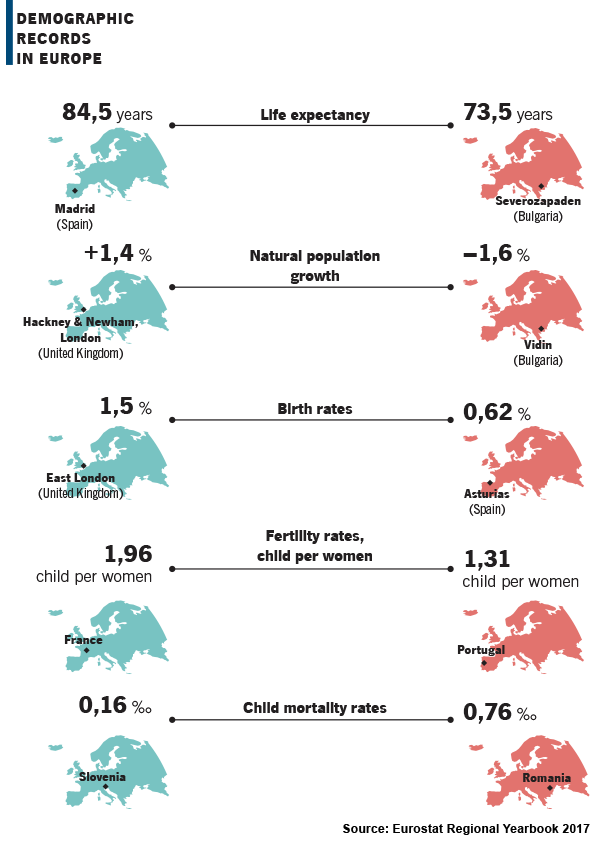 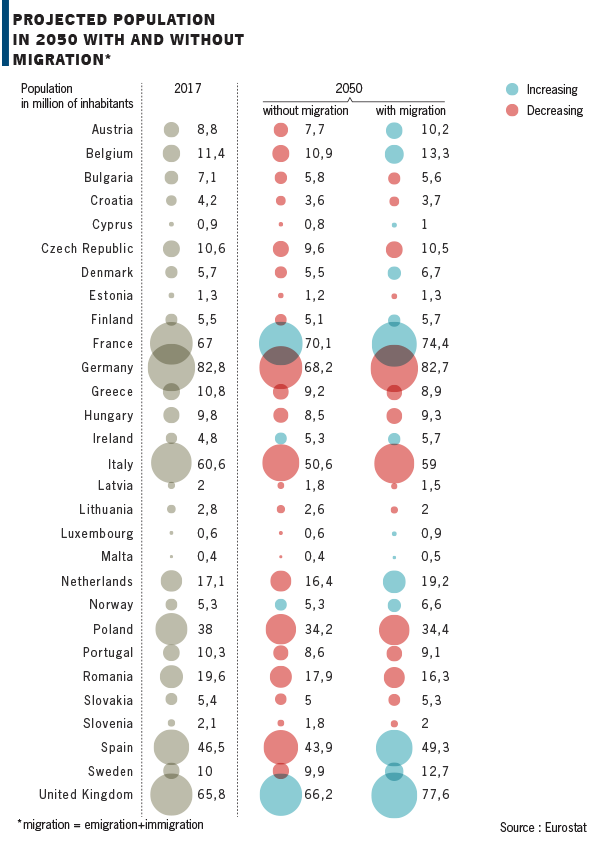 Africa is the only continent for which the UN has revised its population forecasts upwards several times since the 1980s, due to the following factors:

Africa, the only continent with a significantly growing population 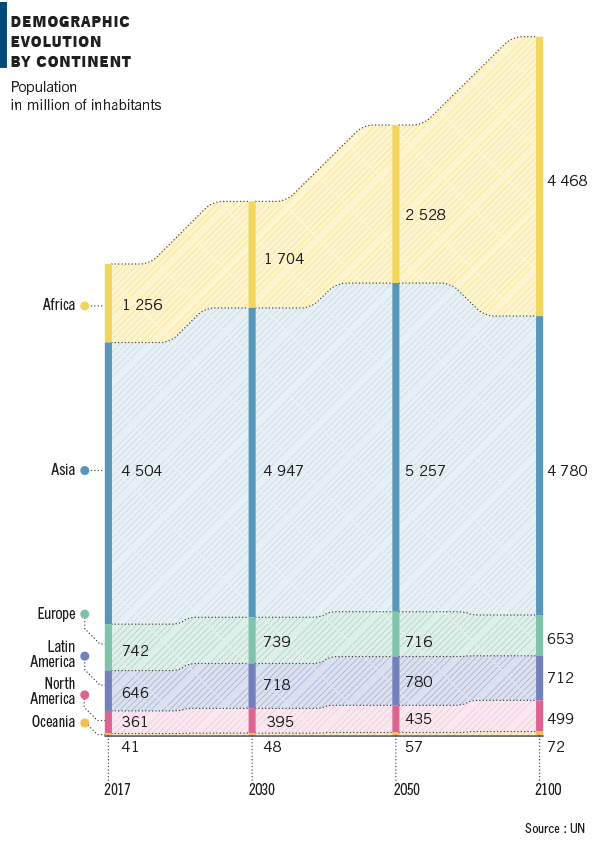 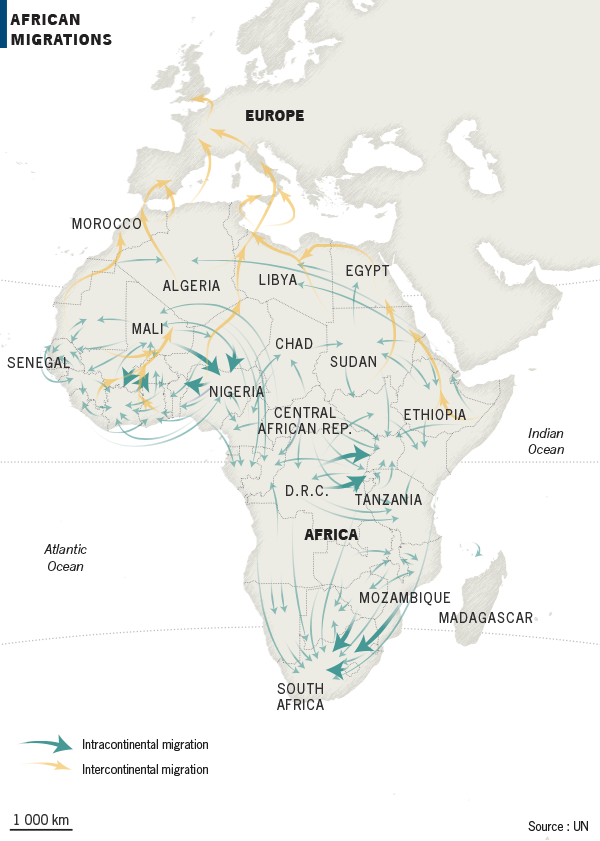 For the world population?

The world population is growing (1.10% per year). According to the UN, it will continue to do so. However, the global trend is decelerating. The demographic transition - from high to low birth and mortality rates - is taking place at various levels around the world. Indeed:

While there seems to be a global trend, it is however essential to highlight the important disparities between two different groups: on the one hand, that of aging powers (mainly in Eurasia), and on the other hand, that of younger countries (in Africa in particular, but also some parts of Asia). In coming decades, half of the world population growth will come from the contribution of about 10 countries: India, Nigeria, the Democratic Republic of Congo, Pakistan, Ethiopia, Tanzania, the United States, Uganda and Indonesia. Map 1.

What will happen to our planet if the population increases, as predicted by the UN, thus reaching 11 billion people by 2100? Will everyone have a chance to be fed?

To answer this question, we must go beyond the pessimistic narratives currently dominating the public debate. The existing nutritional problems, which mainly affect Africa, are, before anything, caused by humans rather than by nature (conflicts, bad governance, insufficient transport). Although still significant, malnutrition is decreasing (11% in 2016, vs. 14% in 2000). The production of cereals per year and per person is greater (over 300 kilos) than are the needs (200 kilos). By optimizing the use and distribution of resources, limiting waste, cultivating new land, and developing more economical irrigation techniques, our planet might, not to say will, be able to accommodate and feed 10 to 12 billion inhabitants, and possibly even more.

Moreover, as advocated by the Intergovernmental Panel on Climate Change (IPCC), movements caused by the environment are generally gradual and highly dependent on economic opportunities elsewhere (flows are therefore still predictable and controllable). While global climate change is indeed impacted by the increase in the world population, it cannot be the sole factor explaining why populations migrate to other territories.

… for the new geopolitical order?

Geopolitics are inseparable from demographic evolutions, since the latter can have a significant and direct impact on the great world powers and drastically reshuffle the cards in terms of soft power.