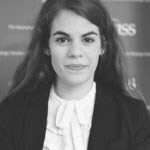 Political Officer at the EU Delegation to the United Arab Emirates

Yvonni Efstathiou currently serves as Political Officer at the EU Delegation to the United Arab Emirates. She has previously worked at the EU Delegation to Madagascar and as a Defense Analyst at the International Institute for Strategic Research (IISS) in London. Her portfolio focused on naval military capabilities and security in the Eastern Mediterranean Sea and the MENA region. Yvonni specializes in the European defense cooperation package (PESCO, EDF, CARD), EU-NATO relations and the Turkish Defense Industry. She regularly comments on defense and military issues for international media outlets such as the BBC and Defense News. She has studied History and Political Science and holds a Master's degree in Security Studies from UCL.

Blog
Weapons of Mass Debate - Greece: a Key Security Player for both Europe and NATO
12 July 2021 | Yvonni Efstathiou | Bill Kappis
During the Cold War and until 2001, Greece hosted US nuclear weapons on its territory, as part of a NATO nuclear-sharing agreement. Yet, recent geopolitical developments - the US’s progressive military disengagement from the Middle East, its "pivot to Asia", debate around removing nuclear weapons...
Next
Dossier |
Next
Publication -
Next
...
Next
Séminaire réservé exclusivement
à nos entreprises adhérentes
Restricted to
member companies
Next