The Mafia in the Time of the COVID-19 Crisis : a European Challenge 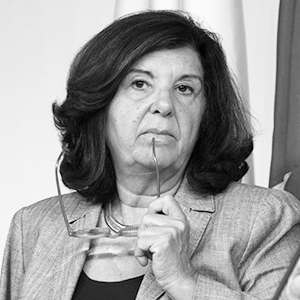 Former Minister of Justice and Professor of Law

A former Minister of Justice and Professor of law, Paola Severino is a highly respected voice in Italy on justice issues and in the fight against the mafia. On April 6, she sounded the alarm in one of the major Italian newspapers, La Stampa, on the new activism of criminal organizations in the context of the Covid-19 crisis that has particularly affected Italy. Institut Montaigne asked her about the reasons for this concern and how to deal with it.

The sanitary crisis in Italy leaves many families and businesses vulnerable, and you have raised the alarm in the Italian press that the mafia is filling the void in many ways. What are the signs that the mafia is more active during this crisis?

Two different theoretical considerations and a practical verification led me to raise the alarm on the real danger that criminal organizations could take advantage of this period of health emergency and economic crisis to try to strengthen their position.

Firstly, I observed that criminal organizations have been weakened in Italy by a regulatory and judicial system that has vigorously fought them with every means at their disposal. We followed the teachings of Giovanni Falcone, the heroic judge who was a victim of the mafia. His thinking is summarized in two historical sayings: cut the grass under their feet, and follow the money. In doing so, we managed not only to condemn the leaders of the great mafia gangs, but also to seize the immense wealth produced by mafia crimes. Nevertheless, weakening does not mean defeating and the fire is still smoldering beneath the ashes.

Secondly, a weakened but undefeated organization naturally seeks all possible avenues to strengthen itself. For example, it uses every weakness of the social fabric to create proselytes, or attempts to infiltrate businesses to invest money from highly profitable illicit activities such as the arms trade and drug trafficking.
I then carried out a practical verification by getting in touch with the managers of schools in the South of Italy who are participating with Luiss University - of which I am Vice President - in a project whose aim is to strengthen legality. They served as "social alarm sensors", describing the plight of some families of artisans, street vendors and seasonal workers who had lost all sources of income and thus found themselves in a condition of absolute poverty. These families had been approached by people from criminal associations who supplied them with food parcels in exchange for - as you can imagine - future recruitment.

We followed the teachings of Giovanni Falcone: cut the grass under their feet, and follow the money.

As for the North of Italy, the picture showed the disastrous state of businesses, especially small and medium-sized ones, whose activities had been totally shut down. These companies, needing financial resources in the short term, are exposed to the risk of acquisition by criminal organizations who still have black market money to use. Indeed, the Italian government has done well by immediately guaranteeing liquidity to families and to small and medium-sized enterprises.

Is this problem limited to Italy, or is there a risk elsewhere in Europe?

Despite what certain foreign newspapers have unsuccessfully tried to claim, this problem is by no means limited to Italy. The major international criminal organizations have amassed immense financial liquidity over time, which has undergone various stages of money laundering, in order to then be used in apparently lawful investments. Such an enormous amount of money originating from a wide spectrum of illicit traffic which – just like the coronavirus - does not stop at any border and flows into the international economy. Vast sums of money that seek the easiest path to travel, through so-called forum shopping, to end up in countries where the level of vigilance is lower, the quality of legislation is less stringent and sanctions are less severe, serve to create opportunities to take over companies weakened by their lack of liquidity when such a dramatic pandemic occurs.

It is the underestimation of the phenomenon and the tendency to blame neighbors for negative behavior that lead to a lowering of the guard, and to playing into the hands of the criminal organizations, who are always ready to take advantage of every opportunity.

What kind of European coordination would you request to tackle this issue?

To begin with, all the phenomena that can result from the activities of criminal organizations should be monitored.

All the phenomena that can result from the activities of criminal organizations should be monitored.

I am thinking once again of the enormous gains arising from the illicit arms trade and drug and human trafficking that have financed terrorism for years and which could be used to stimulate, during this emergency period, new forms of proselytism, generated by the poverty and hunger suffered by many immigrant families in Europe. I am also thinking about the transactions and investments involving illegally-gained proceeds which are made easier by those countries which, believing (or rather deluding) themselves to be immune from infiltrations by criminal associations, did not adopt adequate tools to prevent money laundering, nor systems of preventive seizure and subsequent confiscation of money having a suspicious origin. The saying "pecunia non olet" ("money does not stink") does not apply to this field and European coordination on the matter must occur in the knowledge that no countries are exempt, that we must never let our guard down and that we must shift to the maximum level of harmonization of laws to ensure that, at least in Europe, no free zones or less heavily controlled areas exist.

See also
Coronavirus | Europe / World
Covid-19: Still No Sign of Lockdown for Sweden
BLOG | 27 March 2020 | Alice Baudry
This article was updated on April 10.   Unlike most countries in the world, Sweden has no lockdown approach to Covid-19. Since March 24th, people can no longer be served at the counter in cafés and restaurants as usual – service is provided directly at the table and tables are...
Next
Coronavirus | Europe / World
Putin’s Constitutional Reform Challenged by the Coronavirus Pandemic
BLOG | 16 April 2020 | Quentin Peel
In Russia, the coronavirus outbreak is occurring during a constitutional reform that is particularly important for the ruling president. This reform, announced by President Vladimir Putin in a speech on January 15, is being hampered by the growing extent of the Covid-19 pandemic and its...
Next
Inscrivez-vous à notre newsletter
pour ne rien manquer des actualités de l'Institut Montaigne S'inscrire