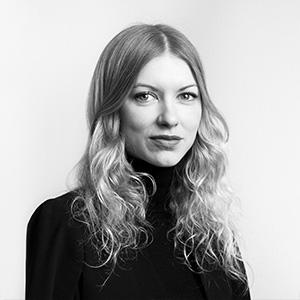 Blanche is the Editorial Director of Institut Montaigne.

Between 2018 and 2021, Blanche held several positions in ministerial cabinets: to the Minister of Higher Education, Research and Innovation, where she was in charge of parliamentary issues, equal opportunities and culture; to the President of the French National Assembly, where she was advisor in charge of culture, education and equality between women and men.

Blanche joined Institut Montaigne for the first time in 2015 as a Policy Officer. She was Head of Operations from June 2017 to November 2018. She coordinated the Institute’s editorial and event activities. She was also in charge of the links with governance.

Blanche teaches at Sciences Po and is the author of an essay published by Éditions Bouquins in February 2022, Odyssées Ordinaires.

She holds a Master’s degree in Public Affairs from Sciences Po Paris. Before Sciences Po, she studied Classics in Literary Preparatory Class and History at UCL (University College London).

Publications
Ready for Today’s Africa?
Publication - September 2017
Ready for Today's Africa? If so, the nine following conditions must be met....
Next
Analyses
Seeing Double: Reflections on France
11 August 2022 | Blanche Leridon
Are political duos an effective alternative to the solitary and centralized exercise of power? This question is at the heart of our Seeing Double series published in the past month. Our six portraits of political duos are all illustrations of the delicate, sometimes unnatural, act of sharing or...
Next
The War Which Must Not Be Named
Editor's Dispatch
24 May 2022 | Blanche Leridon
It’s now been three months since war broke out in Ukraine; three months since the world has been embarrassed and daunted by that word, "war", when it’s not whispered or entirely silenced. Silenced by Russia, of course, where its use is now punishable by 15 years of prison. In his May 9th...
Next
France’s Presidential Elections Under Europe’s Eye: A Race Already Won
5 April 2022 | Blanche Leridon
In April 2017, all of Europe had its eyes glued to the French presidential election. With 2016 bearing witness to the Brexit referendum in the UK as well as Trump’s victory in the United States, the rise of populism seemed inevitable. Was its next stop going to be France, with a win for National...
Next
Series |
Next
Publication -
Next
...
Next
Séminaire réservé exclusivement
à nos entreprises adhérentes
Restricted to
member companies
Next