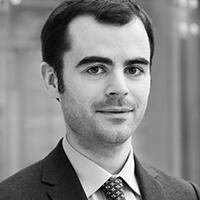 Given the absence of any new government in Germany before March 2018, Emmanuel Macron ended up mainly occupying the European field with words in the first year of his term. The French President thus delivered various seminal speeches on Europe in September 2017: first in Athens on 7 September 2017, secondly at the Sorbonne University on 26 September and then at the European Parliament on 17 April 2018. He called for a European awakening, the aim of which would be to reinforce European sovereignty and to efficiently respond to Europeans’ expectations and concerns.

In October 2017, France managed to convince a majority of European States of the necessity to reform the posted workers directive. As of now, the posting’s length will be limited to 12 months and the “equal work, equal pay” principle will be recognized. At this stage, social contributions will continue to be paid in the country of origin, which is not enough to fight “social dumping”, as denounced by Emmanuel Macron.

The coming to power of a new government in Germany invites both the French President and the German Chancellor to define a common agenda, and to then try to exhort the 27 Member States of the Union to join their position. However, the French President might not manage to convince Berlin to make significant progress on some critical issues, such as the reform of the Eurozone or defence.

Speech by Emmanuel Macron on democracy in Greece

Initiative for Europe - speech by Emmanuel Macron for a sovereign, united, democratic Europe

Agreement on the reform of the posted workers directive

Rebuilding the European project was one of Emmanuel Macron’s top priorities during the presidential campaign. In his book Revolution, published not long before his election, he criticizes the European system for being “cut off from the world and from real life”, and emphasizes the “notable paucity of [its] ideas and methods”, which according to him are the cause of the European people’s mistrust. The candidate called upon Europe to regain the “taste for the future” and to share a “joint aspiration for recovery”.

Emmanuel Macron’s election occurs a month after the British vote to leave the European Union (EU). Candidate Macron understands the Referendum’s outcome as a need for protection, to which the Union was unable to respond. The European project he supports is that of a “protective Europe”, able to defend the sovereignty of the States it gathers.

According to Emmanuel Macron, “those who truly believe in sovereignty are pro-Europeans”. As a candidate, he proposed to reinforce European sovereignty through 5 dimensions: security, growth, the role of Europe in globalization, sustainable development, and digital technology. Following this logic, his priority is to reform the Eurozone by associating to it a budget capable of funding investments throughout Europe in order to foster growth and job creation (see the section “Defence” for European defence and security issues and the section “Eurozone” for reforms of the Euro area).

More specifically, the candidate proposes to:

Finally, in order to reinforce the democratic nature of the Union, candidate Macron indicated that he wanted to implement democratic conventions throughout Europe in order to give the floor to the people and to reach a common project.

In terms of reforms, President Macron’s main success has been to revise the 1966 posted workers directive, one of his campaign promises. This reform allows an employer to post one of his employees in order for him to perform a mission in another country. President Macron managed to convince part of the Central and Eastern European countries – posted workers’ main countries of origin and strong advocates of the mechanism – to accept revising the rules in order to counter social dumpling that it would create within the internal market according to several States. At this stage, social contributions will nevertheless continue to be paid in the country of origin, which, as admitted by Emmanuel Macron in his Sorbonne speech, is “the main source of inequality”. The road transport sector will remain exempt from the new rules, set on October 2017.

Regarding negotiations on Brexit, Emmanuel Macron remains firm on the position previously defended by François Hollande. Whilst indicating that the United Kingdom will be able to benefit from a special trade agreement with the Union, he wants all 27 members to preserve their unity within the internal market more than anything.

Finally, regarding the organization of “democratic conventions” all over Europe, President Macron managed to convince the large majority of his partners (except for Hungary) of the merit of such an initiative. Each Member State will organize important consultations in spring of 2018, in order to define roadmaps that will fuel the 2019 European elections campaign. The French President will deliver a speech in front of the European Parliament in April 2019 to launch these democratic conventions.

A large number of projects are still being drafted, be it reforms of the European asylum law, the European trade policy, the convergence of tax and social standard, or the reinforcement of the digital single market.

Emmanuel Macron wanted to make use of the year between the constitution of a new government in Germany in winter of 2017 and the beginning of the European elections in winter of 2019 in order to reinvigorate the Franco-German couple and implement a majority of his proposals. The unexpected turn the German elections took and the 6 months required to compose a new government prevented him from achieving his goal and constrained him to occupy the European field mainly with words.

Emmanuel Macron thus delivered 2 seminal speeches in September 2017, in Athens and at the Sorbonne University. During both, he detailed his vision of Europe, as developed during the presidential campaign. He felt free to make use of lyricism to call upon the continent to show more audacity. These claims concealed – for a brief moment – the specter of the EU’s dissolution that had been looming since the Referendum on Brexit, and gave hope to supporters of the European project. The success encountered by populist parties in the last parliamentary elections in Italy closed this parenthesis, and Emmanuel Macron’s pro-European narrative seems increasingly isolated on the European scene. In his speech delivered in Athens before the German elections, the French President particularly emphasized the importance of European history, culture, values and democracy. At the Sorbonne, he then gave a more detailed outline of the ways in which he wishes to “rebuild a sovereign, united and democratic Europe”. He also hinted at the possibility of a multi-speed Europe, explaining that “EU27 cannot function in the same way that the Inner Six did”.

During his speech, he therefore presented the main reforms he wishes to implement in Europe, including:

To conclude, Emmanuel Macron proposes that Europe rely on two pillars: democracy and the rule of law, and the single market. For the first pillar, a “multi-speed Europe” would not do the job, and the French President wants European values, i.e. the very basis of their unity, to be reinforced. As for the second, a principle of convergence, rather than of competition, must prevail. This would enable the single market to recover its protective dimension, its simplicity and efficiency.

In the speech he gave on 17 April 2018, Emmanuel Macron emphasized the importance of reinforcing the way democracy functions in Europe in order to dispel any and all authoritarian ideas among member states. This stake appears to be a direct response to Viktor Orbàn’s reelection in Hungary the previous week.

The delay in the implementation of his European program must be contextualized. Emmanuel Macron always made it clear that his first objective was to reinforce France’s credibility by reforming the country’s economy and by decreasing its public spending. In this regard, Emmanuel Macron seems to have managed to convince his partners of the reality of his reforms and of the ambition of his agenda. This is demonstrated by the fact that the country has no longer been, since beginning of March, categorized as a European country suffering from “excessive macroeconomic imbalances”, as it had been since 2009. However, a year of reforms are not enough to make up for the reputation acquired by France during the last decades. The modernization of public action, initiated by the launch of the “Public Action Committee for 2022” and the Draft Budget Law for 2019, will be moments of truth taken very seriously by France’s main partners.

Two issues will soon become crucial for President Macron: his European partners and the agenda.

Regarding the second point, because it took so long for Germany to compose its government, the French President’s ambition has been thwarted. He now needs to convince Berlin to move quickly in order to carry out ambitious reforms before the start of the European elections campaign, during which many of the continent’s Eurosceptic parties should challenge his very “federalist” proposals. The organization of democratic conventions all over Europe within the next months should allow him to gain political capital and to shed light on the actions he is undertaking.

Finally, the French President has promoted a profound “political reshuffling” of the European Parliament during the next European elections. Efforts have been made throughout Europe to convince some countries to join the French majority party La République En Marche in a potentially new group of MEPs. Candidate Macron’s proposal to compile transnational lists for seats left vacant by British MEPs was however voted against by European Parliament.