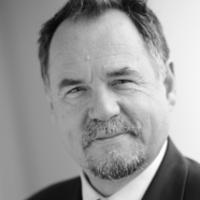 The acceleration of economic growth in 2017 (2.0% GDP growth) came from an improved international and European background rather than from the new government’s initiatives.

To the new team’s credit, ambitious supply side reforms were immediately launched, conducive to corporate investments:

These reforms are hinting at a pro-business mindset very different from that of previous governments, which has boosted business confidence, together with the innovative “Macron method”, characterized by its openness to discussion yet firmness on the main goals of its reform agenda.

Government spending, after a new increase in 2017 (+2.5%) has just been stabilized as a share of GDP (56.5%), despite the acceleration of growth. The 2018 budget bill is hardly convincing when planning spending cuts, given the extreme modesty of expected public payrolls cuts. And yet, the reforms’ success will depend on the firmness deployed to cut public spending: restoring the French economy’s competitiveness, which will require a reinvestment of public resources in areas critical for productivity enhancement (public education, vocational training, research and technological innovation).

To confront the challenges raised by new technologies, the government will have to innovate in tax policy as well as in vocational training.

This is the only way to achieve fiscal consolidation – essential to regaining the trust of France’s Eurozone partners – on a lasting basis, thanks to the increase of the wealth generated by the economy.

Adoption of the 2018 Finance Bill

The housing tax reform included in the initial 2018 Finance Bill, which will gradually escalate between 2018 and 2020, will eventually result in a full rebate of the housing tax for 80% of households. This reform will represent a cost of €3 billion in 2018 and of €10.2 billion in the long term. It will be borne entirely by the State.

The introduction, within the framework of the 2018 Finance Bill, of a single flat tax (PFU) at a 30% rate on capital income, instead of a tax on the scale of income tax on most of this base (excluding life insurance) results in a total reduction in taxation, which would represent a shortfall of €1.5 to 3 billion per year for public finances.

Limiting the solidarity tax on wealth (ISF) to real estate

The suppression of the solidarity tax on wealth (ISF) and its replacement by the wealth tax on real estate assets (IFI) amounts to removing the movable assets from the tax base. The new tax will keep the same main characteristics as the previous one. Given the importance of movable assets among ISF taxpayers (around 70% of total assets), the reform will induce a cost of €3 billion per year to be borne by the State.

During the campaign, candidate Macron summarized his economic strategy in 3 words: 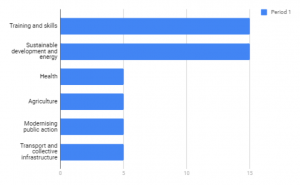 The candidate committed to supporting the purchasing power (progressively scrapping the housing tax for 80% of citizens, lowering employees’ contributions) as well as to encouraging the competitiveness of French companies (transforming the tax credit for competitiveness and employment (CICE) into a lasting reduction of contributions, progressively reducing of the corporate tax). Finally, he wants to redirect savings towards the productive economy, by scrapping the wealth tax, implementing a flat tax on capital income and strengthening the sustainable development tax.

This effort would mean, among other things, getting rid of 120,000 civil service jobs and decreasing local authorities’ expenditure.

By 2022, the net savings from public spending would be used as follows: 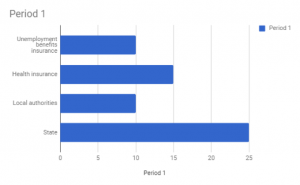 One year in his presidency, Macron’s main economic and budgetary measures can be found in the 2018 Finance Bill. The main ones are:

The public deficit has decreased in 2017: it went from 3.4% in 2016 to 2.6% in 2017, against an average of 1.5% in the Eurozone, and slowed the French public debt’s momentum (97% of the GDP for the gross debt, 87.7% for the net debt, on the rise by 0.2 GDP points). Nevertheless, the high level of the structural deficit (excluding cyclical effects) makes difficult a lasting reduction of the debt, while expenditure should increase in the medium term, given population ageing. The reforms aiming to strengthen the offer – reducing the labor cost through the transformation of the CICE into less taxes, reducing corporate tax, making the labor market more flexible, secondary education and vocational training – should in the long term raise the productivity and the produced wealth. This should therefore alleviate the relative weight of public spending. It is impossible at this stage to estimate the extent of such weight, but without any reform, French competitiveness will undoubtedly keep slowing down.

The 2018 Finance Bill reduces by 1,600 the number of civil service workers, which remains ludicrous and will complexify the planned decrease of public spending (1.5% in 2018, after 2.5% in 2017). The launch of a deeper reform of public administration, aiming to scrap 120,000 jobs from its workforce, is more ambitious. But we will have to wait for the conclusions of the 2022 “Public Action Committee”, in charge of the audit of public spending and missions, to better judge of the government’s will to reduce spending.

Paradoxically, one of the government’s greatest achievements so far has been to ward off social backlash in the launch of the first reforms, in particular the overhaul of labor laws. The “Macron method”, firm on its principles, but open to negotiations without taboos, probably played a critical role in this achievement.

The search for a compromise reduced ab initio the first reforms’ ambitions, and some of these compromises could weaken their future impact. The predominant role given to organized professional sectors in wage agreements, as well as the reluctance to cut public spending, are striking examples of this risk.

We could equally argue that the success of the “Macron method” is the best way to ensure the pursuit of reforms going forward, provided that the political will remains firm throughout the presidential term. The SNCF  national railway reform and the social unrest that it has triggered are critical tests of that will.

In order to reinforce the quality and the competitiveness of French companies’ supply of goods and services, the government will have to pursue structural reforms and cut taxes. This will require spending cuts, not only because of the sound budget rules imposed by the Monetary Union, but also because of the predictable rise of long-term interest rates: if in March 2018, 10-year government bond yields were as low as 0.8%, the end of the ECB asset purchase program in September 2018, and the expected rise of monetary policy rates in 2019 may raise the 10-year rate from 0.5 to 1.0 point of percentage by the end of 2019.

To reduce public spending, the government will have to be more ambitious and more specific on the reduction of the number of civil servants. It is important to initiate a long-term dynamic, reaching beyond just this presidential term, through a deep reform of the uncountable statuses of civil servants, in order to reduce the share of employees who have a “special status”, and increase the share of public employees having a fixed-term contract. It is also necessary to shift from trying to check the job-searching behavior of jobseekers by means of controls to a logic of economic incentives to find a job, through a more significant reduction of unemployment benefits over time, but also through clearer tax incentives, in the spirit of the earned income tax credit.

By reducing public spending, the government will be able to reduce the weight of tax levies on companies and creators of value. There could also be progress on a faster reduction of corporate income tax (the goal being to cut it down to 25% by 2022 versus 33% now). This would send a strong signal to companies and foreign investors. Experimenting special economic zones designed to spur technological innovation in areas benefiting from world class research institutions could also be considered.

Finally, the government will have to be more lucid and realistic regarding competition between countries and companies in terms of disruptive technologies such as artificial intelligence, for which China and the United States are far ahead any other region in the world. To stimulate private investment in these domains, the government will have to innovate in terms of tax policy, considering for instance the possibility of making investments spending entirely deductible from the tax base. It will also have to play the role of fair arbitrator in order to preserve a level playing field and keep the market open to competition. Finally, it will have to endorse the role of strategist by opening public databases to companies and researchers, and to increase the role of public procurement in tech-intensive applications. The plan announced by the French President concerning artificial intelligence goes in that direction.