International Law and the War in Ukraine 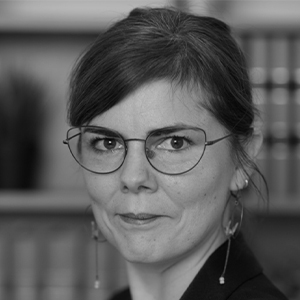 Professor at Université Laval and expert at IRSEM

Since the beginning of the war in Ukraine, the international community has raised alarm about the growing number of war crimes. Most recently, German Chancellor Olaf Scholz described the Russian invasion as a "flagrant breach of international law". For him, the death of thousands of civilians are "war crimes for which the Russian President bears responsibility". As the International Criminal Court investigates different sites in Ukraine, what role can international law play? Julia Grignon, associate professor at the Faculty of Law at Laval University and research fellow in the law of armed conflict at the Institut de recherche stratégique de l'École militaire (IRSEM),shares her analysis.

Following the bombing of civilians in Ukraine, both Joe Biden and Boris Johnson have accused Vladimir Putin of being "guilty of war crimes". What evidence is there for these claims? What are the established Russian violations of international law and the law of armed conflict?

Before addressing legal definitions, it must be said that the actions currently being reported by various media are simply unspeakable.Verifying these accusations implies entering the domain of criminal procedure. At this stage, it is impossible to make a decision on the criminal level: this is the task of a judge who decides on the basis of evidence gathered during a proper investigation. However, based on the images and testimony to date, it is more than likely that war crimes have been, and continue to be, committed in Ukraine.

The Law of Armed Conflict consists in international treaties, not texts that would have been imposed by charitable organizations. It is a law that states themselves have negotiated in order to establish the rules of war. In 1949, these negotiations gave rise to the corpus of the Geneva Convention. In 1977, Additional Protocols were adopted in order to complement the Conventions. All together these treaties aim at, regulating the relations between parties to the conflict. Military chiefs were present in 1949, at the time of negotiating the Geneva Conventions. Therefore, they took part in the discussions about what could or could not be done during armed conflicts. Today, these rules can be found in all military manuals (documents describing the military doctrine of a State). For instance, the U-S- military manual states that "combatants may attack military objectives, but may not directly attack civilians, civilian objects, or other protected persons and property." Similarly, the Law of Armed Conflict emphasizes, "civilian objects shall [not] be attacked ... Attacks must be strictly limited to military objectives." - These are essentially two ways of saying the same thing.

In the context of the current conflict, many violations were reported to be committed by the Russian side.

Concretely, war crimes refer to the serious violations of international humanitarian law. They are now listed in Article 8 of the Rome Statute of the International Criminal Court, adopted in 1998. Some states are not subject to the Court's jurisdiction because they have not ratified the Statute (including Russia and Ukraine). However, all states agree upon the definition of war crimes - this definition is thus the reference tool in this area.

In the context of the current conflict, many violations were reported to be committed by the Russian side. This is partly due to the nature of the fighting: the Ukrainians are defenders. They are not bombing their own territory. So far, they seem to have carried out only one attack on Russian territory. However, violations are being committed on both sides, particularly with regard to the treatment of prisoners of war. For example, the Russians captured by Ukrainian forces were subjected to public humiliation and forced to parade in the streets. The Third Geneva Convention on prisoners of war states that this type of treatment violates human dignity and is therefore a violation of international humanitarian law (Article 13).

Two international courts, the International Court of Justice and the International Criminal Court (ICC), are now looking into the war waged by the Russian leadership against Ukraine. What consequences can the rulings of these two bodies have on the outcome of the conflict? Can they really force Russia to stop its abuses in Ukraine, or even lead to a conviction of Russia?

When the Rome Statute was adopted in 1998, states agreed to give a universal court (the ICC) jurisdiction to try their nationals who had committed war crimes. Against all odds and despite major challenges, the Rome Statute entered into force in 2002 and now 123 parties. Some of them have used application clauses limiting the constraints imposed by the Statute. In any case, the Court exists: it issues judgments whose interpretations make it possible to determine the applicable law and provoke debates within the states. Neither Ukraine nor Russia is a party to the Rome Statute. Nonetheless, the ICC prosecutor already went to Ukraine with a team to document the actions on its territory. This investigation concerns both, the Ukrainian and Russian sides. It seeks to gain evidence for a future trial, since Ukraine has recognized the Court's jurisdiction. The involvement of the Court in an ongoing conflict is already a major step forward! Beyond the ICC and the International Court of Justice, several organizations monitor the situation, including the OSCE, the United Nations Human Rights Council, or the European Court of Human Rights.

Despite the responsiveness of these institutions, the timeframe of international criminal law remains long: the ICC will not be able to try individuals during the conflict. To me, it seems highly unlikely that Vladimir Putin will be tried in the near future. However, we must remember that individuals like Slobodan Milošević and Radovan Karadzic have been successfully tried in court, as have other major criminals in the Hague.

It seems highly unlikely that Vladimir Putin will be tried in the near future.

We should therefore think twice before adopting a certain cynicism and saying that Vladimir Putin will never be brought before a judge. This would fundamentally undermine the role of international justice.

Another point worth mentioning is that both, Russia, and Ukraine, recognize the existence of International Humanitarian Law. In fact, both sides claim that they did not violate the law, implying that the law exerts a form of constraint on them. Even when they commit the worst abuses, states defend themselves and do not want to be singled out for violating the law. We sawee this, for example, with the Russian reaction following the bombing of the maternity hospital in Mariupol. Russia first claimed that there were armed individuals in the building. It then went on to say that the attack was carried out by Ukrainians themselves. However, Russia never claimed that it bombed a civilian property because it had the right to do so. There are other potential Russian war crimes related to the siege of certain cities or techniques that seem to aim at wiping certain places off the map. However, other Russian attacks seem to comply with the rules of armed conflict.

The law is everywhere, even if we cannot see it. All states around the world - with a few exceptions - have sided with the law and are taking advantage of the possibilities that it offers. Russia’s exclusion from the United Nations Human Rights Council is a recent illustration of this. This is part of a turning point taking place in international relations. We are now aware of the strength of the multilateral system. Above all, we are aware of the omnipresence of law in this system. Though it is true that the law needs politics to function - it is through political will that certain mechanisms can be triggered and that the law can be followed by action.

There are legal frameworks for the current situation: the law of war (jus in bello) and the law governing the use of force (jus ad bellum).

We are now aware of the strength of the multilateral system. Above all, we are aware of the omnipresence of law in this system.

Of course, the law is applied unevenly and is sometimes instrumentalized. Nevertheless, I am happy to hear leaders today stating loud and clear that cluster bombs and indiscriminate bombing are prohibited. States, as well as members of civil society, stand behind the law of armed conflict. This implies going beyond political declarations, which is currently the case with Ukraine and Russia. It is necessary to start the legal process, but it will not be enough on its own. In this respect, law and politics are complementary.

See also
Europe / World
Ukraine: Putin’s War to Change the World
ARTICLES | 15 April 2022 | Michel Duclos
At the end of his lengthy meeting with Vladimir Putin in the Kremlin on February 7, President Macron said that his Russian counterpart appeared to have "changed." Putin seemed locked in the past, harping on about the same old grievances and appearing uninterested in possible solutions to the crisis...
Next
Europe / World
From Sarajevo to Mariupol: what the Yugoslav Wars can teach us about Ukraine’s fate
ARTICLES | 14 April 2022 | Bruno Tertrais | Loïc Tregoures
Comparisons between the former Yugoslavia and the war in Ukraine abound, especially with each new report of the horrors committed by Russian forces. The siege of Ukrainian cities is reminiscent of Vukovar and Sarajevo, while Butcha has been described as "the new Srebrenica". Commentators are...
Next
SIGN UP FOR OUR NEWSLETTER
for a handpicked selection of analyses each week Yes please
Dossier |
Next
Publication -
Next
Russie
...
Next
Séminaire réservé exclusivement
à nos entreprises adhérentes
Restricted to
member companies
Next