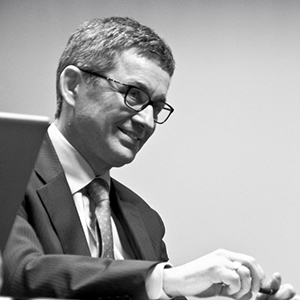 How has Venezuela ended up in chaos and misery? To answer this question, we need to take a good look at what it means to change from Hugo Chávez to Nicolás Maduro. Olivier Dabène, professor at Sciences Po and one of Latin America's finest connoisseurs, provides his insights here.

When Nicolás Maduro announced Hugo Chávez’s death on Venezuelan television on 5 March 2013, the sobs and tremors of his voice reflected much more than sincere sorrow. The Vice President and designated successor of the leader of the Bolivarian Revolution was most probably gripped by anguish given the magnitude of the task that lied before him. How would he defend the revolution’s achievements in an economic and political environment that had become very unfavorable? How could the flame of the revolution be kept alive without the charisma of its emblematic leader? How could international pressure be resisted to put an end to an increasingly criticized experience? How to address the chaos in which the country was irremediably sinking?

The task seemed all the more difficult as Maduro knew he was fragile. He certainly was one of Chávez's most faithful followers, but he did not have the personal qualities required to galvanize supporters, or simply to preserve the unity of his political family in the face of adversity. Is the former bus driver, who became Minister of Foreign Affairs and then Vice President, the executor of Chávez's will or his gravedigger?

Maduro's life story is not the kind that encourages the emergence of a legendary figure, like that of Chávez or Lula in Brazil. Born in 1962 into a "working class family", his birthplace is not known for certain. Maduro changed his story several times, in order to refute the recurrent accusation that he was born in Colombia, his mother's country of origin. Article 277 of the Constitution prohibits holders of another nationality from running in presidential elections. He hasn’t ever provided any clarification regarding his academic background either. A mediocre student, rumor has it he never graduated from high school. His official biographers prefer to mention an early stay in Cuba where he attended the school for the Communist Party's executives in 1986.

During these years of struggle and advocacy, Maduro managed to make himself useful, if not indispensable.

In the early 1990s, Maduro was a bus driver in Caracas. A very active trade unionist, he supported Chávez's attempted coup in 1992, then campaigned for his release when he was imprisoned. When Chávez was freed in 1994, Maduro was by his side to help him convert the Bolivarian Revolutionary Movement 200 (MBR-200), founded in 1982, into the Fifth Republic Movement (MVR) and prepare for the 1998 presidential election.

During these years of struggle and advocacy, deep bonds were forged. Maduro managed to make himself useful, if not indispensable. At the same time, he maintained strong links with Cuba, to the point that some believed he was a liaison officer in charge of "watching over" Chávez.

In 1998, Maduro was elected deputy and became head of the MVR parliamentary group. Soon after that, he was elected to the Constituent National Assembly and became chairman of the people’s participation committee. Once the Constitution was adopted by referendum, new legislative elections in 2000 enabled him to regain his seat and his function as leader of the parliamentary group of the presidential majority.

Yet the triumphant march of Chavism faced some obstacles. Thus, the attempt to control trade unions, the pillars of the "old regime" (1958-1998), failed. In 2001, Maduro was the coordinator of the Bolivarian Socialist Workers Force (FSBT), a trade union federation supposed to weaken the powerful sectors affiliated to social democracy that controlled the Confederation of Workers of Venezuela (CTV). In the elections for the CTV's governing bodies, the FSBT was severely defeated and Maduro asked for the election to be cancelled - one of the first displays of his anti-democratic tendencies.

Between 2002 and 2004, the Venezuelan opposition in turn showed little respect for democracy, by trying to get rid of Hugo Chávez in every possible way. On 11 April 2002, it organised an attempted coup (which failed), then in December it declared a "civic strike", which paralyzed the oil industry, and in August 2004, it initiated a revocatory referendum (which also failed).

The Chavist camp became more radical and Maduro played an important role in this new stage of the revolution. In 2005-2006, he was President of the National Assembly and, in 2006, was appointed Minister of Foreign Affairs by Chávez. His seven-year track record as head of Venezuelan diplomacy is rather good. Latin America’s shift to the left was providential. With the support of Cuba, Bolivia and Ecuador, and in agreement with Lula's Brazil, Venezuela deployed an active "petro-diplomacy". Many initiatives were launched, including the creation of the Union of South American Nations (UNASUR) and the Community of Latin American and Caribbean States (CELAC). From 2011 onwards, Chávez, who was already weakened by illness, started preparing Maduro for his succession. The leader of diplomacy then represented his country at most diplomatic summits.

On 7 October 2012, Chávez was elected President for the fourth time. Everyone knew he would not be able to complete his mandate. The appointment of Maduro as Vice President on 10 October was thus all the more significant. On 7 December, in one of his last public interventions, Chávez asked Venezuelans to elect Maduro were he to step down. The accolade could not have been clearer. Three days later, in an emotional speech, Maduro declared his loyalty "beyond life" to Chávez. On 10 January 2013, Chávez was not in a position to take office to begin a new term. Maduro then organized a "collective inauguration" in Caracas before a huge crowd and distinguished guests (Evo Morales, Daniel Ortega, Pepe Mujica). There, he gave a speech that already positioned him as a head of state.

On 7 December, in one of his last public interventions, Chávez asked Venezuelans to elect Maduro were he to step down. The accolade could not have been clearer.

When Chávez died on 5 March 2013, Maduro orchestrated his succession. He acted as interim President and ran as a candidate in the elections organized on 14 April, which triggered a controversy over various interpretations of the Constitution (Articles 229 and 233 in particular). The opposition argued that only the President of the Assembly could act as interim President and that a sitting Vice President could not run in presidential elections. The Supreme Court finally ruled in Maduro’s favor and the elections were maintained. Maduro won a narrow victory, with 50.6% of the votes.

The succession was to be challenging, especially as Chávez embodied the Bolivarian Revolution and its so far positive track record for the low-income social categories in the oil boom context. Oil prices were following a downward trend in 2013 and Maduro did not seem able to manage the looming economic collapse. Moreover, his political supporters were elusive. In six months, the Chavist camp lost 500,000 votes, and its hard core became increasingly radical as the opposition's public expanded. Yet satisfying this loyal electorate could only further polarize the country.

The following period was headlong rush forward. The regime stiffened in the face of an opposition that was becoming the majority, but did not deviate from its political line as the country sank into economic chaos and a humanitarian tragedy of an unknown magnitude in the region..

Maduro is a President whose election has been recognized by very few countries in the world, and who governs a bankrupt country.

In 2014, the first major demonstrations were severely repressed, and many opponents were arrested. A political crisis that Maduro failed to contain was added to the already existing economic crisis. In December 2015, the opposition won the parliamentary elections. Maduro’s reaction was to have the Supreme Court declare the invalidity of any act emanating from the Assembly. He then did all kinds of electoral manipulations to prohibit the opposition from winning elections. The authoritarian shift was completed.

In 2016, the Electoral Council prohibited the revocatory referendum requested by the opposition. In 2017, a new wave of demonstrations was met by police and paramilitary brutalities, resulting in about 100 deaths and thousands of more or less arbitrary arrests. That same year, Maduro had a Constituent Assembly elected, in order to further marginalize the legislative power, and won municipal and governorship elections under suspicious conditions. Finally, in 2018, he was re-elected President, while the opposition boycotted the election.

Maduro orchestrates a context of permanent electoral campaign in order to mobilize his supporters. Unable to stop the collapse of the economy and the humanitarian and migratory crisis it causes, he fosters a climate of war against any external aggression. The official discourse of the international conspiracy against the Bolivarian Revolution builds up on the sanctions imposed by the United States and Europe against certain personalities of the regime, the aggressiveness of the Secretary General of the Organization of American States (OAS), and the alleged attempt on Maduro’s life by a drone on 4 August 2018. This narrative galvanizes troops, yet makes it very complicated to envisage a peaceful way out of the crisis.

As he prepares to enter his second term (January 10, 2019), Maduro is a President whose election has been recognized by very few countries in the world, and who governs a bankrupt country. His political family can undoubtedly credit him for having preserved what matters most: the resilience of the regime that has allowed him to share the oil rent for the past 20 years. Nevertheless, Maduro has brought his country to disaster by squandering Chávez's political capital and destroying his social heritage. He may try to imitate Chávez's jovial neopopulist style, but it hardly makes a difference. It is difficult to imagine a way out of the crisis that doesn’t involve his departure, in one way or another.