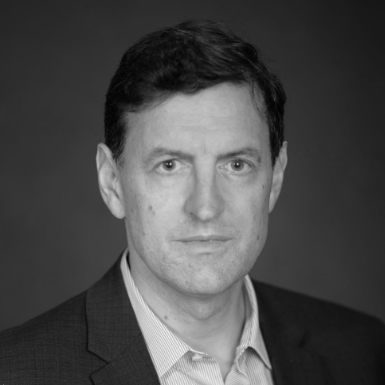 For several months now, tension has been rising between China and the United States over tech. Chinese President Xi Jinping, for example, stated that "technological innovation has become the main battleground of the global playing field, and competition for tech dominance will reach unprecedented levels". Former Google CEO Eric Schmid alerts the American public that "in each of the foundational technologies of the 21st century - artificial intelligence, semiconductors, 5G wireless, quantum information science, biotechnology and green energy - China could soon be the global leader". In August 2022, President Joe Biden signed the CHIPS and Science Act, providing $280 billion to the US Tech industry to “counter China”. Of this amount, $52.7 billion is dedicated to semiconductors.

During the second round of France’s presidential election debate, on April 20, 2022, the distance between "la French Tech" and technological innovation elsewhere entered the discussion. "Amazon, Apple and Google are American, TikTok is Chinese: how can we create a French Google, a French Steve Jobs?" journalist Léa Salamé asked, thereby introducing this important question into the French national political debate.

Europe's technology gap has often been pointed out. The new Sino-American rivalry dominates global competition in digital tech. Europe lags far behind and its position is only deteriorating. This situation is not inevitable, however; the causes are clearly identified and can be addressed. For the first time since 1945, the political cost of inaction could be greater than the cost of change. There is a historic opportunity to return to the forefront of innovation and reinforce the continent’s security.

The tech revolution not only affects traditional industry; it is disrupting our lives and our relationship with politics. It also gives a critical advantage to armed forces (thanks to satellites, drones, and guided missiles…), as the Russian difficulties in Ukraine currently show. American leaders know that their global dominance is as much about their technological strength as their 12 aircraft carriers. Chinese leaders understand that the challenge to American leadership goes through tech first and foremost. Europe, on the other hand, has failed to become a true techno-power and is therefore absent from this battlefield.

European tech indicators are not in good shape, to say the least. In terms of R&D invested in tech specifically, the share of European countries in the global total has been declining rapidly over the past 15 years. Germany has dropped from 8% to 2%; France from 6% to 2%.

The European Union invests five times less in private R&D in the tech sector than the United States. China, which started from nothing 20 years ago, has largely overtaken Europe and is aiming to catch up with the American continent at a rapid pace. 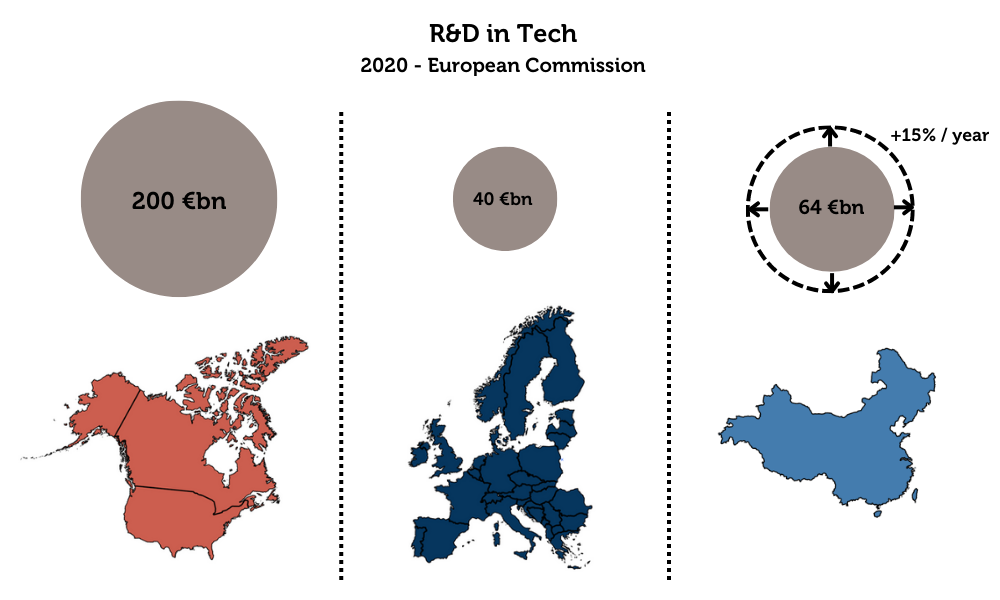 If we now look at the largest tech companies, ranked by R&D investment, US players clearly dominate. There is an impressive presence of new Chinese champions, too. The weak presence of European manufacturers is glaring. 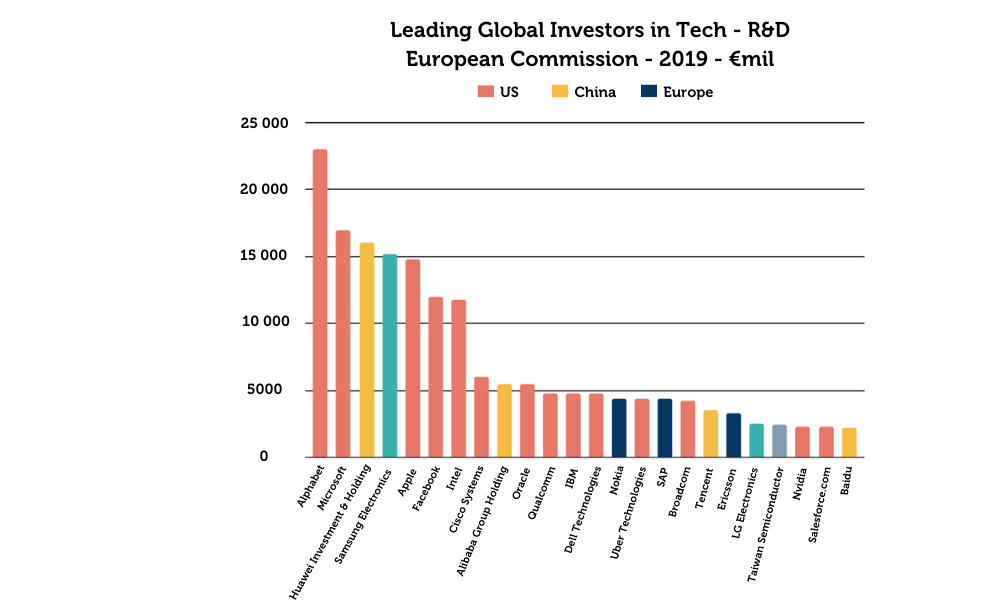 Investment in startups is another standard indicator. First of all, Europe attracts three times less funding than the US. 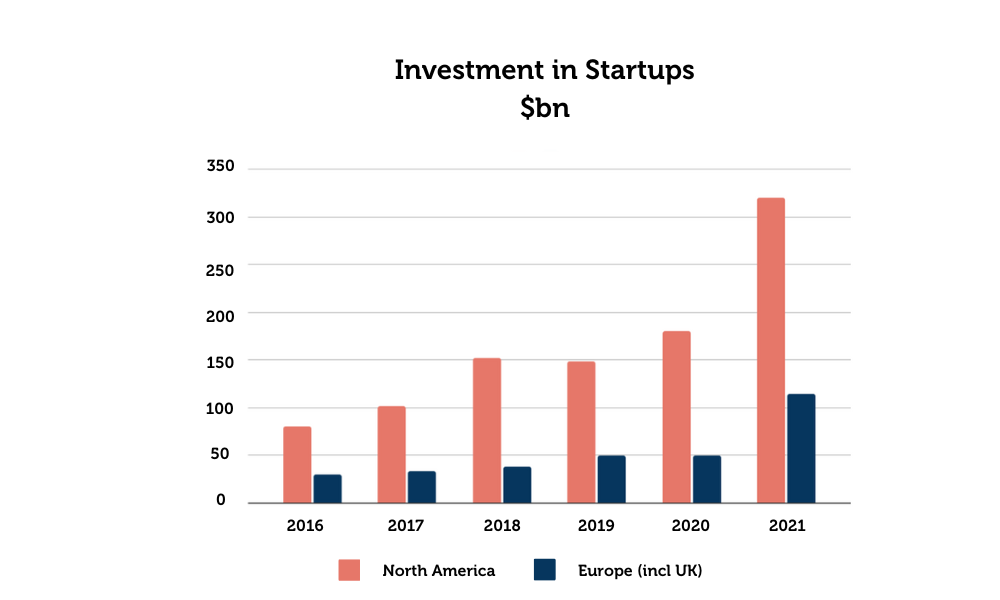 Secondly, within Europe, France attracts three times less investment than the UK and Germany attracts half as much investment as the UK, even though its GDP is 40% higher. 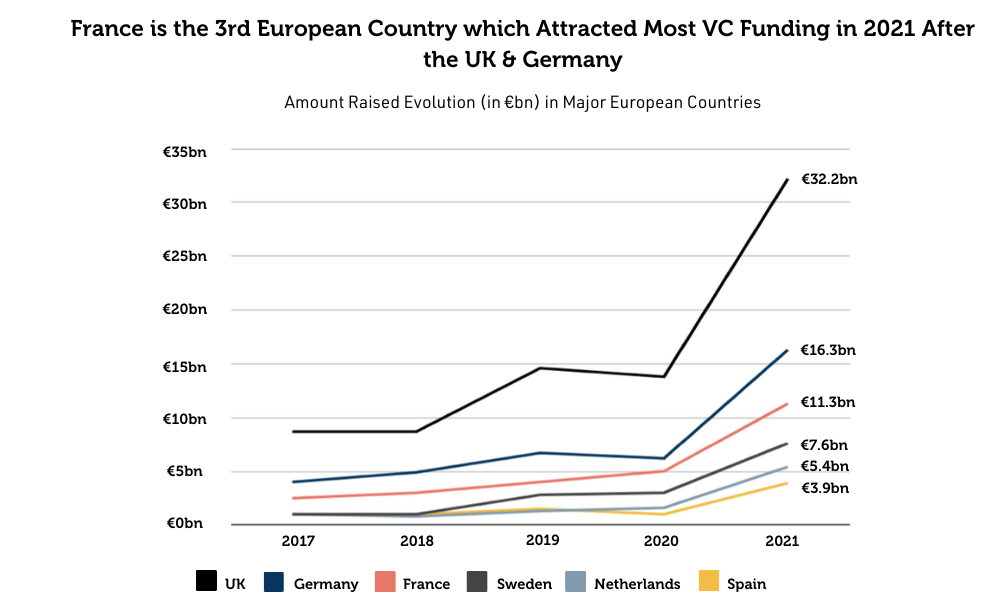 Finally, unicorns are often cited as evidence of the dynamism of German or French tech. In this respect, though, Germany and France are only the 4th and 6th European countries in terms of the market capitalization of their unicorns, lagging far behind the UK and Israel (considered European in this ranking). 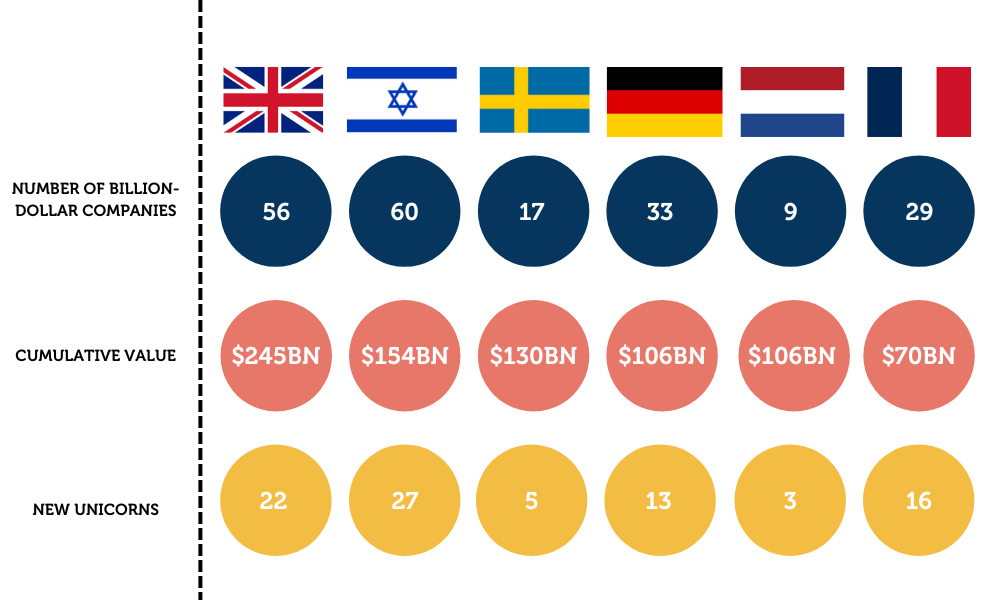 The costs of risk-taking in Europe

Clearly, for Europe, indicators are worrying despite an increase on certain fronts, such as fundraising. What explains this? Numerous well-known causes are generally cited: a European culture that is more reluctant to take risks; the fragmentation of the European market; insufficient capital; regulations that are harmful to innovation; a competition policy that weakens European champions by blocking mergers and limiting public aid… All these causes are valid. Yet European governments have been aware of them and trying to correct them for at least 30 years, without managing to prevent the situation from deteriorating. Should we be seeking answers elsewhere?

Having collectively spent over 50 years in the tech world, in large companies and in startups, the authors of this article observed several factors that hold Europe back in terms of digital development.

The main factor, and the subject of this article, concerns restructuring costs. The cost of restructuring a large company’s R&D team in continental Europe is €200,000 per person. This cost includes the duration of collective bargaining, severance pay and redeployment or re-industrialization measures. It is similar throughout continental Europe, with a peak of €250,000 in Germany. This cost does not exist in the United States, China or India.

A large company that launches a tech project in Europe will have to pay for the restructuring of the teams if it fails. A typical example is shown below: 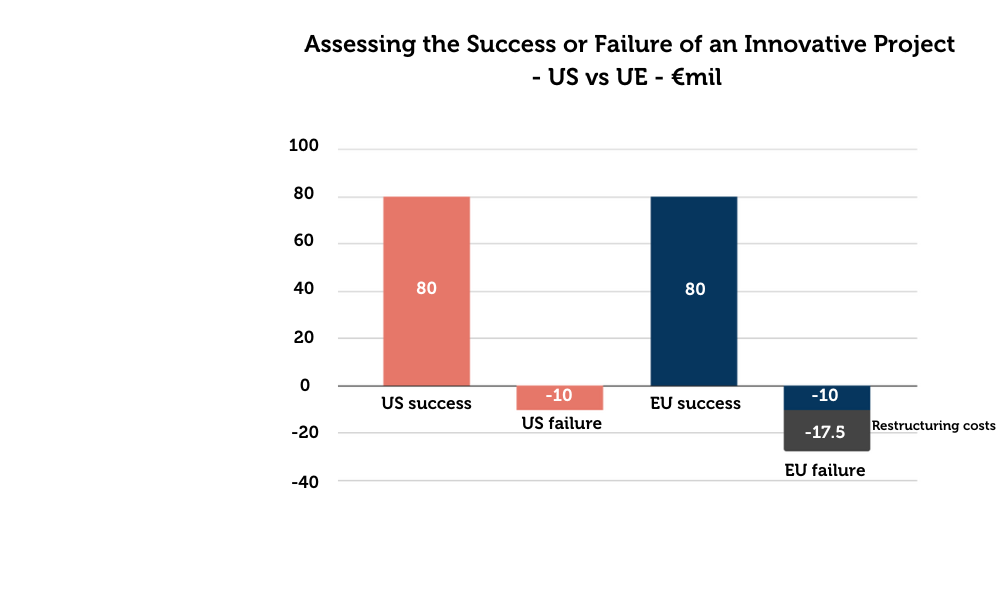 The success rate of tech projects is about 1 in 5. At Amazon, Google or Microsoft, innovative projects are being launched after thorough qualification rounds, with the full awareness that 4 out of 5 projects will fail. Investment funds finance 10 projects for one real success story and nine that fail or simply survive. We are in the midst of an industrial revolution; there are uncertainties about technologies, customers, consumers and competitors that mature industries no longer have. The same applied to car manufacturers in Europe in 1900.

If we combine these two figures, we can see that a large company that launches 5 innovative and risky projects makes money in the United States and loses money in continental Europe: 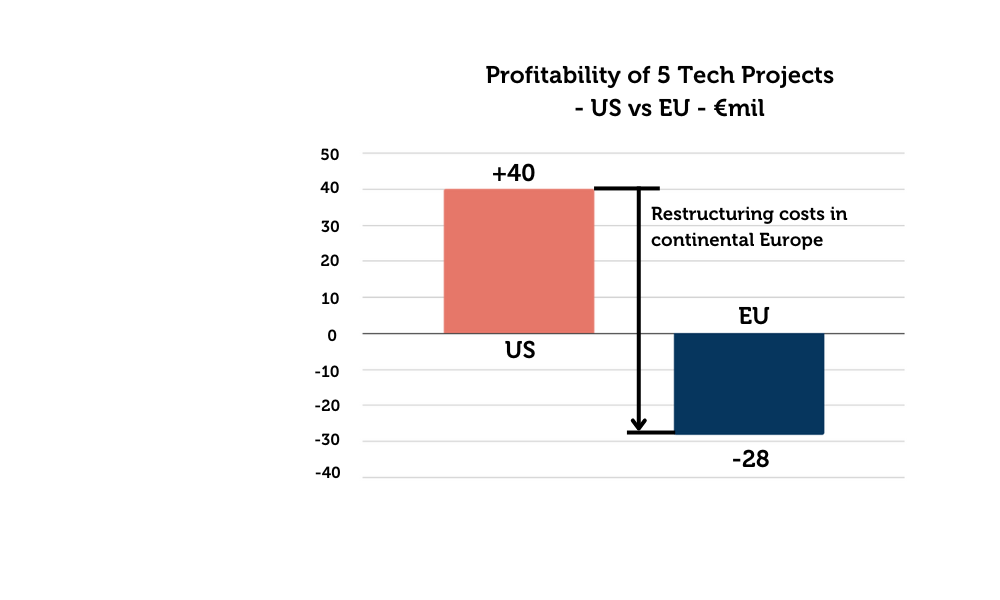 These restructuring costs have no impact on tech startups in the early stages of their growth. However, they make it illogical for large European corporations to invest in tech. Three-quarters of the $200 billion in R&D in the US is financed by former startups that have become large corporations, such as Amazon, Alphabet-Google ($30 billion in 2021), Meta-Facebook ($24 billion), Apple ($22 billion), Microsoft ($21 billion), Intel ($15 billion)... No corporation, European or other, is investing similar amounts in European tech ($40 billion in total). European startups have never managed rival American or Chinese success stories. European restructuring costs are one of the main reasons for this because as soon as European startups reach a significant size (several thousand employees), they are confronted with the restructuring costs of large companies. They then, mechanically, have to stop investing in many risky projects. On the contrary, former American startups like Microsoft or Google retain this capacity and fuel the thriving American investment in Tech.

Moreover, these large tech companies are the ones acquiring startups for astronomical amounts - think of WhatsApp (bought for $16 billion), LinkedIn ($26 billion) and Slack ($28 billion). This propels the profitability of American venture capital funds to levels unheard of in Europe and attracts more and more capital to finance American startups. This partly explains why European startups attract three times less capital than American startups.

The costs of failure also hinder the adaptation of European tech companies to technological changes. Alcatel had to spend nearly €10 billion on restructuring to make a rapid switch from fixed to mobile telecommunications; this was one of the reasons for its demise. Atos has to switch from traditional IT data centers to the cloud. With teams based mainly in Germany and France, it is facing much greater difficulties than its American or Indian competitors.

Finally, the cost of failure explains why startups launched in Europe find it easier to identify large clients ready to launch innovative and risky projects in the US, even if it means closing them quickly if they fail. Conversely, large European clients in all sectors are cautious about uncertain tech innovations and avoid projects that could lead to restructuring.

Therefore, even if the other causes for Europe’s technological gap are also valid, restructuring costs need to be reformed for Europe to participate in the ongoing industrial revolution: tech.

While major efforts have been made to facilitate access to capital for European and, even more so, French entrepreneurs, the characteristics of the European model described above considerably limit the impacts of these policy choices.

A second article will be focused on proposals for action; all data are taken from the book Europe, Tech and War.

See also
Topics > Economy > Tech & Innovation
Zooming in On French Digital Technologies
Analyses | 17 January 2022 | Gilles Babinet | Théophile Lenoir
Well aware of the key role of digital technologies in geopolitics, the Macron administration has made progress in various areas, such as content regulation. Initiatives like Partnership on AI, the Christchurch Call or Tech For Good have helped place France at the forefront of international...
Next
Topics > Economy > Tech & Innovation
The Environmental Impact and Potential of Digital Technology
Analyses | 24 March 2021 | Gilles Babinet
In recent months, there has been abundant media coverage regarding the greenhouse gas (GHG) emissions of digital technologies - particularly due to several fresh alarming reports. The Shift Project and the High Council for Climate Change reports both mention a significant increase in the...
Next
SIGN UP FOR OUR NEWSLETTER
for a handpicked selection of analyses each week Yes please
Series |
Next
Publication -
Next
Tech | Économie | Industrie
...
Next
Séminaire réservé exclusivement
à nos entreprises adhérentes
Restricted to
member companies
Next