Based on an original idea by Marc-Antoine Jamet, Mayor of Val-de-Rueil.

Inequalities, on which the G7 summit, to be held in Biarritz from August 24th to August 26th, will focus, are a constant issue of global - and French - concern. In a world irrigated with false information, where emotion often prevails over reason, it is important to take the heat out of the public debate on this subject, especially in France, a country particularly passionate about equality, where perceptions are often far from reality. Julien Damon, sociologist and associate professor at Sciences Po, shares his analysis on poverty, the middle class and inequalities in France and in the world today.

"There are many people who are in between, neither poor nor rich... French people who work, dreaming of being rich and in fear of being poor!" While these remarks attributed to Mazarin in Le Diable Rouge are fictional, they are nevertheless instructive on the image traditionally given to the middle classes. Neither rich nor poor, they are by definition a whole with, at times, an ill-defined amplitude and a very variable volume depending on the place and time. Overall, the essential transformation of recent years has been related to the evolution of the middle classes. They are emerging in the developing world, and relatively crumbling relatively in the developed world. The dawn of the emerging middle classes contrasts with the decline, more or less pronounced depending on the country, of the Western middle classes.

The global trend is undoubtedly towards emerging countries characterised by a large middle class, while the opposite phenomenon can be observed in wealthy countries. Among the many intervals used to define the middle class, the OECD used the one between $10 and $100 per day (in purchasing power parity) in its 2010 work. These studies reveal a global middle class, which accounted for a quarter of the world’s population in 2009, expected to represent 59% in 2030. Europe, which accounted for a third of the total in 2009, is expected to have only 14% by 2030, while 66% of the world's middle class is expected to be Asian by that date.

A recent study by the Brookings Institution points out that, since 2018, for the first time in the world's history, over half of the world's population is now reported to belong to the middle or upper class. Indeed, with an interval of $10 to $110 to delimit the middle class, 200 million people are rich, 3.6 billion belong to the middle class, 3.2 billion are in a fragile situation and 600 million are poor. Thus, 3.8 billion people are poor or still close to poverty, while 3.8 billion are far from it.

According to the same study, the upheavals would be considerable by 2030: 150 million fewer poor people, 900 million fewer "fragile" people, and 100 million more rich people. The middle class, on the other hand, would gain nearly 2 billion people. While this reflects the enrichment of the emerging middle classes, it is also due to the impoverishment of some of the Western middle classes.

Is the French case exceptional?

French social expenditure - which, at 31.2% of GDP, is the highest in the OECD as a percentage of GDP - is specific to France and is the source of the "U" curve that reflects the effects of the French tax and benefit system. In this context, the middle class comprises the households that are neither disadvantaged enough to receive social assistance nor favoured enough to benefit from tax cuts. Most of the population resides in this interval, in a country where, traditionally, two thirds of people think they belong to the middle class. This feeling of being "neither-nor", neither rich nor poor, neither a leader nor necessarily an executor, living in a district that is neither rich nor totally disadvantaged, was widely highlighted by the Yellow Vests. Enhanced by the increase in some constrained expenditures, it is particularly problematic.

Income data do not show a real crushing of the middle class in France, as in other developed countries. But polarization is underway on several levels: 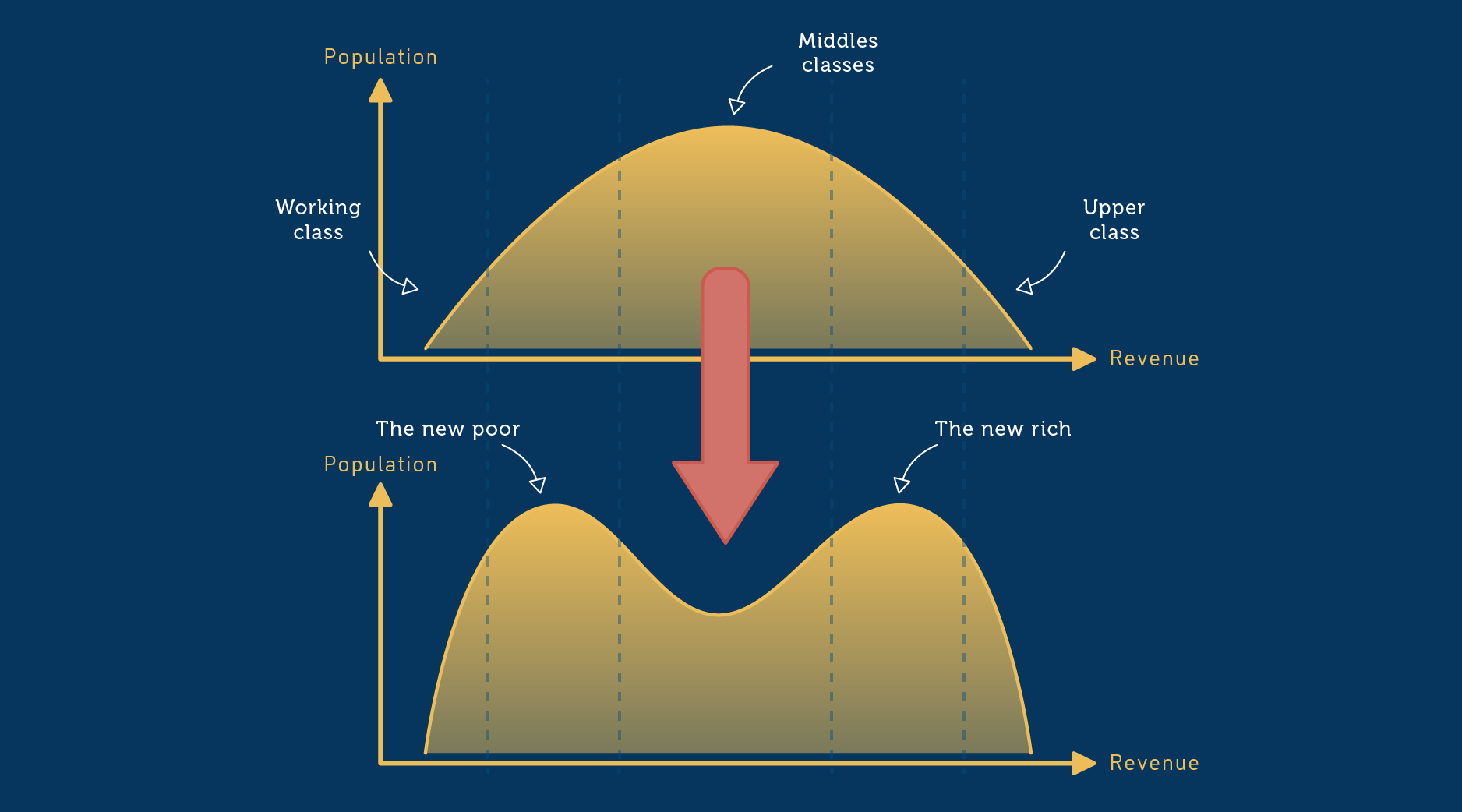 In the world, the evolution of the middle class is the major transformation that occurred in recent years. If today, over half of the world's population belongs to the middle class or the privileged class, we are witnessing two opposite phenomena: the emergence of the middle class in developing countries, on the one hand, and the relative decline of the Western middle class, on the other. While France differs from most developed countries in this respect, it is nevertheless polarized geographically, professionally and socially.